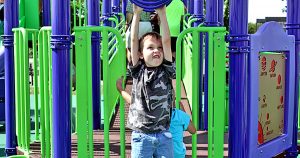 In this file photo, kids enjoy themselves at the grand opening of the Kendyl and Friends Playground.

Crimson Claycomb, the founder of the Kendyl and Friends Foundation, went before the Harrodsburg Board of Commissioners to ask for their help and to defend herself against “personal attacks” against her and the foundation.

Claycomb is asking for funds to make a bathroom at the Anderson-Dean Community Park handicapped accessible. The foundation raised $350,000 to build a handicapped accessible playground at the park which has drawn visitors from all over the state. But the park’s bathrooms are not equipped for people with special needs, she said.

“This is a necessity and it needs to be taken care of,” Claycomb said.

For example, there’s the Overcomer Baseball League, which will begin their third season on Aug. 4. The league has grown from 11 players to 69 players but players have to leave the park if they need to use the bathroom.

“That is unacceptable,” Claycomb said.

Mayor Eddie Long said he supports the foundation’s efforts, but he had concerns. Long said Kendyl and Friends had not qualified for a tourism grant from the city—which comes from money raised through the restaurant and lodging taxes collected by the Harrodsburg-Mercer County Tourist Commission—because the foundation gave out grants that could be used outside Mercer County.

She also said the foundation does not award grants per se, but it does provide assistance to people in need. For instance, they are looking to provide funds to a family who need to build a handicapped-accessible ramp on the rental property where they live.

Claycomb called the playground a tourist attraction. As one of the few handicapped accessible playgrounds in Kentucky, it draws visitors from all over the commonwealth. She said 62 schools visited the playground last year.

The city had set aside funds to rehab the park bathrooms, but had planned to go through the park. Claycomb asked for the contribution to be made directly to the foundation, as she could get cheaper bids for the work than a government entity could.

The city commission voted unanimously to amend the budget to award the foundation $5,000 directly, rather than through the park.

On the subject of tourism funds, Danny Woods came before the commission to ask why Harrodsburg charges restaurant taxes and Danville does not.

She said only fourth and fifth class cities could assess restaurant taxes—which she called user fees. Danville, which is a third class city, cannot.

Regardless, Woods questioned why the tax is being collected. He was told the city had no other way to pay for projects, such as the park and Oktoberfest, which draws so many visitors to Harrodsburg.

“If we could afford to fund Anderson-Dean Park without that restaurant tax, I’d be against it,” said Commissioner Marvin “Bubby” Isham.