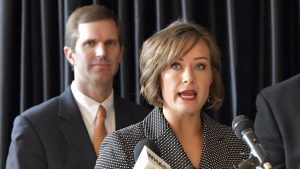 On Monday, Kentucky Attorney Andy Beshear became the first Democrat to announce his candidacy for the 2019 governor’s election. Beshear also introduced his running mate, but she needs no introduction here in Mercer County.

Jacqueline Coleman is running for lieutenant governor. Coleman is the daughter of Jack Coleman, who served as state representative for the 55th district—which includes Mercer County—from 1991 to 2004.

On Monday, Coleman recalled her time as a civics teacher and head basketball coach at Burgin High School, the same school where her grandfather played before moving on to the University of Louisville and an all-star career with the NBA.

“With less than 500 students from kindergarten through 12th grade in one building, Burgin remains one of the smallest, yet one of the most successful, schools in the state,” Coleman said.

“It is clear to me, from experience in public education and from living my whole life in rural Kentucky, that our teachers, our students and our rural communities are hurting,” said Coleman, who has been an outspoken opponent of Gov. Matt Bevin’s efforts to takeover Jefferson County Public Schools and pension reform.

“I believe public education is worth fighting for,” said Coleman, who is currently an assistant principal at Nelson County High School. “Every child, regardless of their zip code, deserves access to the opportunities that a quality public education can provide. Our local communities, our Commonwealth, and the future of Kentucky’s economy depend on it.”

This is not Coleman’s first foray into politics. In 2014, she challenged incumbent Kim King to represent the 55th district, but lost.

Coleman has remained prominent in Democratic politics, founding Lead Kentucky in 2013, a nonprofit that helps Kentucky college women to seek leadership positions on campus and beyond, and participating in Emerge Kentucky, a program that trains Democratic women to run in elections.

The 2018 general election will be held on Tuesday, Nov. 6, but Coleman and Beshear are looking beyond that to 2019.

“In the next two election cycles, we have the opportunity to change the face of politics in Frankfort,” Coleman said.