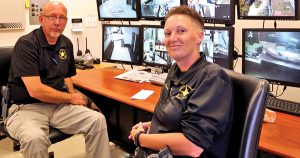 Bailiffs Roger Steele and Angie Ridener monitor the Mercer County Judicial Center. Ridener is leaving to join the Harrodsburg Communications Department, along with four others.

Mercer County’s bailiffs are asking for help in making sure the Mercer County Judicial Center is fully staffed.

Bailiffs—also known as court security officers—are part-time employees who are limited to working 99 hours a month. The Administrative Office of the Courts pays their salary up to $9 an hour. Most of the bailiffs are retired from other jobs and receive no county benefits.

Christopher said his department has lost 15 bailiffs over the last six years and he’s losing five more over the next couple of weeks. For each replacement, the county has to spend up to $1,500 in equipment and training. However, many of the new hires leave after three months, requiring the county to turn around and pay to train their replacements.

In order to keep the judicial center safe, Christopher said he has to have three bailiffs for each courtroom and two to man the metal detector at the front door. A few months ago, a man walked into the courthouse carrying heroin and a large amount of cash.

“He came in off the street,” Christopher said. “He wasn’t even an inmate.”

When the bailiffs attempted to take the man into custody, he became violent, Christopher said.

“We had to Taser that guy right in the middle of the courthouse,” Christopher said. “It’s hard to ask a 70-year-old man to do that.”

In addition to their duties at the judicial center, bailiffs also handle jail transports. During the Trent Easterling trial, it was bailiffs—not deputy jailers—who transported Easterling to and from jail.

Christopher is asking the county to transition four bailiffs to 32-36 hours a month. Judge-Executive Milward Dedman asked him to write up a proposal so the county could take action.

County Attorney Ted Dean asked Christopher to check with the Kentucky Retirement Service to make sure expanding bailiffs’ hours would not affect their pensions.

Mercer County Sheriff Ernie Kelty wants to reassure the public that the judicial center is safe. Kelty and deputies fill in when needed.

The fiscal court was also asked to consider making Bill Cruce, a part-time deputy with the Mercer County Sheriff’s Office, to be made full-time.

A retired teacher with the Mercer County School System, Cruce completed his training at the police academy earlier this year.

Kelty reassured the magistrates that the county won’t have to reimburse the state for Cruce’s insurance, although he added, “We can’t get anything in writing.”

The sheriff typed up a letter stating that if the Kentucky Teachers Retirement System did ask for reimbursement, the sheriff’s office would handle the cost. If they were unable to afford the extra expense, Cruce would return to part-time duty.