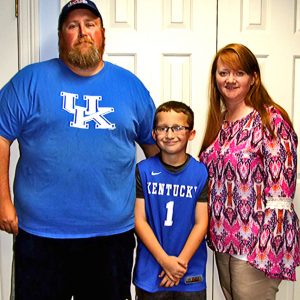 There’s nothing better on a hot summer day than lemonade. And coming up this August, that lemonade’s going to taste even sweeter thanks to a new charity campaign for Shriners Hospital for Children.

During the 127 yard sale (Aug. 1-4), lemonade stands will be set up across Mercer County with the proceeds going to the Shriners, who operate a network of children’s hospitals in Lexington and across the United States.

Shriners Children Hospital for Children is well known for their outstanding health care of children. Many families are touched by their commitment to provide low cost quality orthopedics options to the community.

Mark Elliot, Carter’s father, is a Shriner himself, “I never did worry about his club foot because I knew he would be taken care of at Shriners,” Elliot said.

Starting when Carter was 11 days old, weekly appointments for casting and setting became the norm for the Elliott family. “Carter considers Shriners his hospital,” said Angie Elliott, Carter’s mother. “From the time he could talk we would say we are going to the doctor and he would say, oh we are going to my hospital.”

The Elliott family visited Carter’s hospital every week for two years. After surgery and rehabilitation, Carter is now a normal 9-year-old boy.

Shriners will follow Carter until he is at least 18 years old to be sure he doesn’t have any other problems with mobility.

“Shriners Hospital is the world’s greatest philanthropy,” said Mark Elliott. “The Shriners’ motto is; ‘No man is ever tall as he stoops to help a child.’ Carter walks and plays sports because of the care he received from Shriners.”

Community support for the hospital helps children and in turn, the Mercer County community is 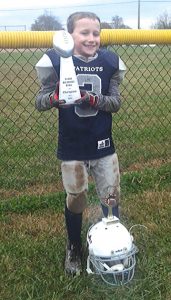 Carter Elliott was born with a club foot but can now do anything any 9 year old boy can do. His father attributes his recovery to the treatment he received at Shriners Hospital.

coming together to help Shriners Hospital this August.

A community wide lemonade stand to raise funds for the hospital is set for the week of Aug. 1-4 during the 127 yard sale.

The national campaign to help the hospital raise funds is centered around the theme ‘kids helping kids,’ and Mercer County’s community wide lemonade stand will continue with that trend.

Many local businesses and school groups have already committed to participating in this community wide lemonade stand such as:

The Arts Council of Mercer County is making free signs for those participating in the fundraiser that can be picked up at 120 S. Main Street, starting July 11. Call the Arts Council to confirm sign orders at 859-613-0790.

To participate is easy. Open a lemonade stand and donate the proceeds to Shriners.

Donations can be dropped off locally at Lawson’s Jewelry located at 105 S. Main Street or contact Jackie Dawson, philanthropy assistant at Shriners Hospital for Children in Lexington at 859-268-5770 or jndawson@shrinenet.org.