A change in leadership has gifted Mercer County soccer with new Head Coach Doug McClain. Every good soccer team needs a leader on and off the field.

Class of 2019 players Andrew Turpin and Angelo Ontiveros will be seniors this season and leaders on the pitch. Between the two of them there is 19 years of soccer experience and they’re hoping to show it on the field this fall. This year’s senior class has been a part of three regional championship teams so they know what it takes to win.

The two players are excited about both the season and the new head coach.

“He knows the roots of the program and he participates in the drills with us,” said Turpin. “I like that Coach is playing with us and pauses the game to help us and tell us what to do to get better.”

Ontiveros said that Coach McClain will have the team in the best shape they’ve ever been in, which both players agreed would benefit the future of the program. Some might say that this season could be considered a rebuilding year.

“We’re going to have a bunch of younger guys who really want to step up and be a big part of the varsity team,” said Ontiveros.

A new head coach and a very talented group of seniors leaving will result in many vacant positions to be filled, mostly inexperienced players or underclassmen.

“You have to trust the process in high school sports. This year is going to be tough but it is good for the program. I expect this year’s team to definitely be a top team in the region; although we might be young and have a lot of learning and chemistry to develop among one another, we are going to be underestimated by a lot of teams,” said Turpin. “It’s not a bad thing to be underestimated, because it gives us something to fight for.”

The Titans biggest competitors this season will be Danville and West Jessamine, but this class is planning to finish their high school careers with four region championships.

Quality over quantity is one way to describe the Class of 2019.

“We have a great group of seven seniors that return with a lot of experience. This class is looking for their fourth region title in a row, they have to be mindful of our tough regional opponents and not get complacent,” said McClain. “If they are willing to put in the hard work, then we should have a successful season.” 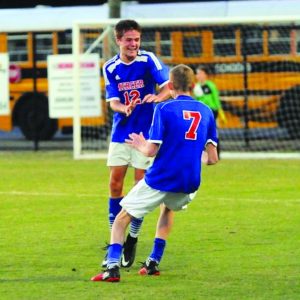 Andrew Turpin (12) and Luke Dean (7) celebrate after a goal last season. Turpin and Dean are just two of seven seniors looking to lead the Titans under new leadership for the 2018 season. (Photo Submitted)