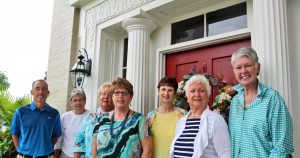 It has been an eventful couple of weeks for the Harrodsburg-Mercer County Tourist Commission, and not in the sense of promoting tourism. The tourist commission’s newly elected chairwoman resigned before leading her first meeting of the board of directors. The commission, who collect restaurant and lodging taxes and use those funds to promote tourism in Mercer County, has also been attacked for not investing more money in the community.

Lois Mateus was elected chairwoman at the tourist commission’s last regular meeting, then resigned on June 25. Mateus had represented the Mercer County Chamber of Commerce on the board since 2016 and had been reappointed for a second term set to begin on July 1. In her letter of resignation, Mateus said she was going to “spend time for personal and other projects.” The chamber of commerce will have to appoint another representative and the tourist commission will need to elect another chair.

On the same day Mateus resigned, Art Freeman complained about the tourist commission to the Harrodsburg City Commission. Freeman said the agency collected over $700,000 in taxes last year and paid out $5,000 in tourism grants.

“It appears to be unethical, immoral and illegal,” Freeman said. “Don’t you think the taxpayers deserve to see an audit?”

Karen Hackett, the tourist commission executive director, said the agency acts strictly by the law and said the public can view audits on a state website.

In 2014, the state auditor’s office required all special purpose governmental entities to post their financial statements on the Department of Local Government’s website.

Hackett said anyone who wants to look at the tourist commission’s audit, can find it online along with the previous year’s budgets at kydlgweb.ky.gov. The special purpose governmental entities public portal can be found on the left side of the screen. In the field for county, enter “Mercer.” She said the 2018 audit would be available soon.

According to the 2017 audit, the commission took in $894,794, the bulk of that—$638,286—from the restaurant tax. Almost half of that—$318,967—was paid to the City of Harrodsburg, who used the money to sponsor events like Oktoberfest, the Kentucky Fort Harrod Beef Festival and the Whitaker Bank Mercer County Fair and Horse Show. The tourist commission spent $159,318 in advertising Harrodsburg and Mercer County. “That is the role of a tourism commission,” said Hackett, who also noted that in 2017, tourist activity generated $35.9 million in direct spending and $56.6 million over all in Mercer County, a 7.5-percent increase over the year before.

The restaurant tax is perhaps the most detested tax in Mercer County, but Hackett said it was misunderstood. “It’s not a tax,” she said. “It’s defined by the Kentucky Department of Revenue as a user fee.” She said the user fee is not mandatory like a property tax or an occupational tax. “One only pays when they choose to dine within the city limits,” Hackett said.

She said the amount people pay in restaurant user fees is offset by the tax relief brought about by tourism-related spending. In addition to funding events like the Broadway Days Festival and the Fort Harrod Jazz Festival, the money the tourist commission turns over to the city in turn funds other agencies such as the Ragged Edge Community Theatre, Anderson-Dean Community Park and the Harrodsburg First Main Street Program. Without the restaurant and lodging user fees, which are paid by everyone, including visitors, they would be paid through property taxes, which are paid solely by residents. Hackett said Harrodsburg homeowners received $670 in tax relief last year.

“For 11 years, it has benefited the citizens of the community by improving the quality of life, and of the special taxing districts that are defined by the Department of Local Government. I would guess that the Harrodsburg-Mercer County Tourist Commission impacts the local economy the greatest because of the tourism and economic impact to the city and county,” she said.

The tourist commission’s budget for the 2018-2019 fiscal year projects $913,413 in expenses, with 70-percent of that—$640,150—in marketing, which includes $315,000 to the City of Harrodsburg. The commission’s biggest single expense is advertising. They plan to spend $200,000 advertising Mercer County to potential visitors.

Hackett also refuted Freeman’s claim that the tourist commission paid out only $5,000 in grants. Hackett said the commission does not make grants. It buys sponsorships to local events such as Salvisa Ruritan Days, Lights Over Herrington Lake and the Burgin Fall Festival. Before the commission purchased the Diamond Point Welcome Center for $251,000 back in 2015, they offered $1,000 sponsorships, but they have limited sponsorships to $500 due to the expense of maintaining the historic property.

“There’s a great financial responsibility,” Hackett said. “The board is dedicated to being good stewards.”

The tourist commission has spent the last several years checking off a list of projects for the historic landmark. Last year, they painted the exterior of the building, using a local contractor.

Their remaining projects include repairing the stone wall facing College Street and repainting Diamond Point’s interior. While they are looking for local contractors, Hackett said work on the wall will not begin until the state finishes repaving College Street. The tourist commission owes one more payment on Diamond Point. Hackett said the directors have not discussed increasing sponsorships again once the debt is retired.

Finally, Hackett refuted Freeman’s claim that he was not welcome at their meetings.

“We abide by Kentucky’s open meetings laws,” said Hackett, who has served as the tourist commission’s executive director since 1993. “No employee, either myself or my assistant, told anyone that. Mr. Freeman never contacted me or my office.”

The next meeting of the tourist commission will be held 8 a.m. at the Diamond Point Welcome Center on Wednesday, July 18.