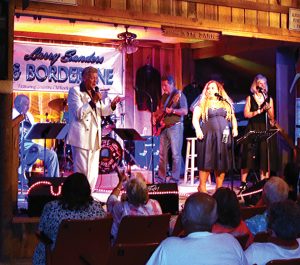 Larry Sanders and Borderline hit the stage at the Burgin Barn.

Larry Sanders and Borderline are rocking their second season at the Burgin Barn.   Every Friday night the Barn is alive with old rock and country music.

“A radio show once called us Burgin’s best kept secret,” said Sanders. He and the band have been together for many years, but they only took over the barn last year.

“The barn set empty for two years and someone called and asked if I was interested,” said Sanders. “This is our second season and we play every Friday night with the exception of the day after Thanksgiving.”

Founded in 1999, the band has eight core members and they include guests in their line up often. “We want to feature other artists and give their songs a chance,” Sanders said. “Everyone will be entertained and they’ll probably know some faces. ”

“Music, it’s just like if you were an athlete, it’s always there. At this point in my life, we’re certainly not doing this to make a living, all of us have day jobs and a few of them are retried. All of us have different backgrounds, but it all just blends together,” said Sanders.

Guest vocalists are common with Clint Spaulding being the most recent. Spaulding is a Louisville native who sings with the gospel group Drops of Mercy.

Friday night was Spaulding’s second time performing at the barn. He is scheduled to appear at Bohon Christian Church on Sunday, July 8, for a free community picnic

People from all over Kentucky travel to the Burgin barn.

“The music drew me here,” said Jim “Rusty” Jackson, who traveled from Versailles. “I come at least once a month.”

“Burgin’s Little Secret, the Burgin Barn provides some of the best live country music around. It’s a new show featuring local talent and some of the best pickers in the region,” said Kentucky Living Magazine in their May issue.

Tickets are $10 for the show and it usually includes door prizes and contests during the half time break.