The golf program at Mercer County Senior High School is getting major upgrades to its driving range.

Mercer boys golf Head Coach Jay Anderson confirmed that the new facility and range have been in the works since the end of the 2017 season.

Anderson said the new 24×16 facility has already been installed at the range.

The old building the golf program used will still be beneficial.

“The existing building will go to the softball program for middle school and high school,” said Anderson.

The previous driving range has wooden platforms, that were taken down, and will now feature 80×8 concrete pads. The new concrete pads will be the site for permanent tees that will be installed later this week.”

“The highlight of the project is that we’re going to have a 750 square foot synthetic putting green,” said Anderson. “Instead of being just a range, it will be a practice facility.”

Anderson is very excited about the new facility and can’t wait to get things started in the fall.

“It’s a fully functional facility, so it will allow us to practice at anytime. Here for the past two winters, we haven’t had a place to practice during the cold months,” he said.

Anderson also said the new facility will reach out to the public.

“We plan on doing junior clinics at the new facility. We’re trying to get kids involved with the sport of golf at an early age. We have plans to do family-type clinics to expose the sport not just to potential student-athletes, but to the public,” said Anderson. “Once the facility is completed, there won’t be one in the state of Kentucky that will be able to match it.”

Former Mercer golf alumni have been a huge part of getting this new facility up.

“Without the alumni, this wouldn’t have been possible. It all started at the end of 2017, we had an alumni give us a very generous donation, and that kick started the project,” he said. “We’ve since received more donations of $1,000 and $5,000 from alumni. Roughly, we’ve had alumni contribute probably in excess of about $30,000 to the project.”

Anderson wanted to give recognition to Catlett Paving Company, McGlone Construction, Inc. and Mercer Stone Company for their efforts in getting the new facility installed.

Anderson projects the facility to be close to completion in about a month due to electricity installations, installing mulch, fencing, etc.

But he said there wouldn’t be a ribbon cutting type ceremony until about October, closer to the beginning of the season.

Construction will continue this week and the new facility at Mercer County Senior High School is on its way. 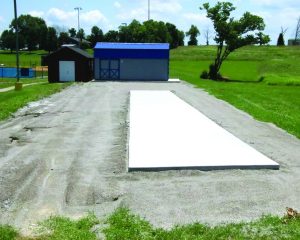 Pictured above is the new golf facility (blue roof) with a brand new concrete driving range for permanent tees. Completion for the whole range and facility will take another month. (Photo by Arpan Dixit)