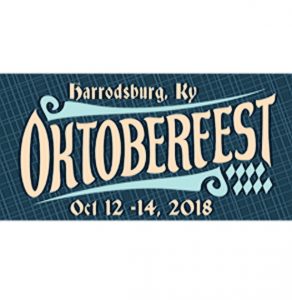 It’s July and all thoughts are on Independence Day festivities and the upcoming Whitaker Bank Mercer County Fair and Horse Show.

But for the members of the Oktoberfest planning committee, it’s all about the fall.

“It is insane how much time and planning this takes,” said Greg Souder, who serves on the committee.

That’s because the festival, which is in its third year, continues to grow.

Last year’s Oktoberfest brought an estimated 13,000 people downtown over three days, to the delight of Harrodsburg merchants. Rod Helton, who owns Charmed Antiques, said his only problem was that the street festival didn’t go all the way to Office Street.

This year Helton will get his wish. In addition to shutting down Lexington Street, the organizers plan to close Main Street all the way to Office Street.

They are currently trying to decide where they will park a 24-tap “war wagon” being provided by Kentucky Eagle, who, with Pepsi, is a principal sponsor, and where to put the kid’s area.

Another issue last year were power outages. When vendors plugged into the street lamps, it would trip the breakers. The planning committee is working with the National Guard to set up two generators this year.

Then there’s the money. Even though by every other standard Oktoberfest is the most successful new event in Mercer County, it has yet to earn any money for its organizers.

The planners say one of the reasons for that is because they have had to make so many investments in getting downtown ready for the event. In addition to adding generators this year, they’re looking to install cafe lights, which will remain in place all year long.

One issue the organizers are not having is finding music. Allen Goldie, who signs the musical acts, said he’s been inundated with bands looking to play at Oktoberfest since even before last year’s festival was over. While most of the music lineup for Friday and Saturday are all signed, organizers are still trying to decide what musical direction to take on Sunday.

While the response was good, the festival is only three months away. This year’s Oktoberfest runs from Friday, Oct. 12, through Sunday, Oct. 14. As always, admission is free.