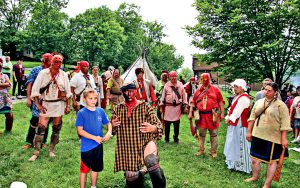 Shawnee reenactor Donald Shaver gets help from volunteer Jack Ross at the adoption ceremony during the Settlement and Raid at Old Fort Harrod State Park on Saturday.

The Settlement and Raid commenced on Saturday, June 23, at the Old Fort Harrod. A crowd of around 1,000 people and reenactment enthusiasts poured in from all around Kentucky, Ohio and Indiana, some came from as far as California.

From the cannon fire and scripted interactions a ‘What if scenario’ was captivating the crowd, Saturday. The final act was the adoption ceremony held at the Native American camp for the settlers.

Although Fort Harrod was never overrun by the Shawnee, the reenactment portrayed a grand ‘What if” scenario about the Shawnee coming to claim the Fort. In June 1780, the British and Indians combined forces, using cannons to capture or kill roughly 10 percent of the population of Kentucky, They did not come to Fort Harrod, but the scenario reenacted is ‘what if’ they had.

Father Son and Friends, sponsored by Friends of Fort, ended Saturday with a concert.