The Campbellsville-Harrodsburg Tigers basketball program have a new head man.

Herve Kouna, who earned his master’s degree in sports management from Campbellsville University in 2017, takes over a program in their second season of existence.

Kouna, 29,  earned his bachelor’s degree in international development from Dartmouth College in 2013.

Before coming to the United States to study, Kouna was born and raised in the African country of Cameroon.

He was hired as head coach in March and couldn’t be more excited to lead the program.

“I was excited at the opportunity to use basketball as a tool to build and mold men of character that would transform the destiny of individuals and communities,” he said. “Hard work and discipline is the name of the game in basketball and in life. Shortcuts are sweet for a short time, but the price that we pay in the long run are not worthy at all.”

Kouna attended high school in Cameroon before finishing and graduating from Canterbury School in Connecticut. Kouna didn’t even start playing basketball until he was 15 years old in his native country. He talked about the struggles of playing back home.

“It was hard to play basketball in Cameroon because it is an expensive sport. You need to have a pair of sneakers, a basketball and an available gym nearby or a black top court to play,” he said. “I loved to play basketball because whenever I played, my mind was empty and I could focus on enjoying myself.”

Kouna was heavily invested in academics before basketball came into his life.

“Up to the age of 15 when I started playing, school was my favorite activity, especially mathematics,” he said. “I was always fond of the exactitude of the scientific methods. I found that same approach in basketball because whatever time you will spend practicing, you will reap the benefits instantly during a game. In a way, basketball and academics have prepared me to face life challenges and cope with its difficulties.”

Kouna is the fifth of nine children to his mother, Felicite Ngono, and his late father, Kouna Fouma Emmanuel.

“My dad was a civil servant in the government of Cameroon and his job duties required him to move around the country regularly, therefore, I had the privilege to visit most areas of Cameroon. My fondest memories growing up are the times that I spent in my village with my extended family,” said Kouna. “I was born in a city, but every summer, I would go back to either my mother or father’s village to spend time with my grandparents on both sides.”

Kouna talked about the transition coming from Africa to the United States in the late 2000’s.

“I was excited to come to the States because I knew I would find a better opportunity to better my life. I come from a people that have been stricken by many ailments due to poverty. For a long time, I was ashamed of my family background, but I have learned that we are not bound to remain in the social strata in which we were born. My life is a testimony of that very philosophy,” said Kouna.

There are always a lot of challenges coming from another country to the States, mainly learning the language and culture.

“Coming here was challenging because I did not speak English and people were trying to put me in a specific box. I assume that many thought that because I was from Africa, black and an athlete, I was not smart enough to achieve certain goals academically,” he said. “This explains why a lot of people made fun of me to the point of ridicule whenever I mentioned my desire to attend the best school in the United States.”

Kouna said his late father had a tremendous impact on how he views others and how he lives his life.

“In Cameroon, we have about 200 distinct tribes in the country, however, I do not recall my father ever associating someone with his tribe. My father always judged people according to their character. That is why I was not afraid to come to the Unites States. I knew that people all over the world would have the same desire: to achieve control over their life circumstance and their environment. I knew deep in my heart that I would come across people that would gladly extend their hand to help me achieve my dreams and ambitions,” said Kouna.

“Dalton and Alston are very capable gentleman. They love the game of basketball, their community and the kids who are part of this program,” said Kouna. “The primary asset that they bring is their enthusiasm to transform the life of the young men that would go through our program.”

Kouna talked about his expectations for the team this season.

Kouna recently got married on Saturday, June 23, to Ashanti Colonel in Shreveport, Louisiana.

Kouna is ready to be the head man for the Campbellsville-Harrodsburg Tigers and is confident his team will have a successful season on and off the court.

“My aim is to dedicate my time, energy and resources to accomplish Campbellsville’s mission that is to mold young men into servant leaders through the tool of basketball.” 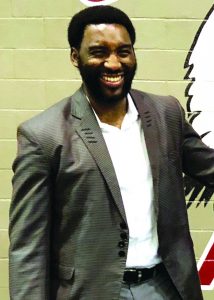