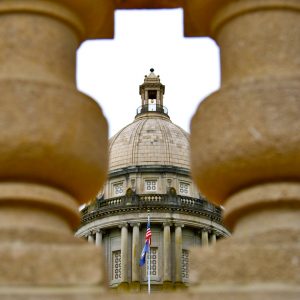 State legislators paid for tax cuts to the wealthiest part of the population by instituting a 6-percent sales tax on a variety of goods and services that were previously not taxed.

Get ready for the sticker shock. The state will begin collecting a 6 percent sales tax on a variety of goods and services, from veterinary services for pets to golf starting July 1.

“It’s messing us up big time,” said Betty Lewis, the owner and manager of the Bright Leaf Golf Resort.

July 1 is the beginning of the 2019 fiscal year, but here in the real world, it’s the middle of the tourism season.

“If it was January, it wouldn’t effect us at all,” Lewis said.

All of her printed promotional materials, her website, are out of date now. On top of that, many of her visitors, who are from out of state and don’t necessarily follow Kentucky news closely, have been given incorrect pricing when booking in advance.

“We’ve quoted one price and we have to collect another,” Lewis said.

While large amounts of money are not involved—Lewis said a $360 golf package would cost $367 after July 1—she said her customers would notice.

“We have a hard time making increases year to year,” she said. She said her customers complain about $2 increases.

Still, Lewis said she and her staff would collect the tax money and pass them onto the state.

It’s not just golfers getting caught in the sand trap. The 6-percent tax will be collected on car repairs and veterinary services—for small household pets like dogs or cats, but not large animals like horses or cows—as well as extended   warranties, bowling, tanning and dry cleaning. Those are just some of the services which fall under the dozen business categories subject to the new state tax.

Even your next family reunion may be more expensive after July 1. Renting the shelter at the Young’s Park in Harrodsburg for a half day is going from $75 to $79.50 while renting it for a whole day is going from $125 to $132.50, said Shelby Lewis, the senior office clerk for the City of Harrodsburg.

The city still has some details to work out, Lewis said. She said she is still unsure if people who have reserved the shelter in advance will have to pay the sales tax.

“We’ll have to figure something out,” Lewis said.

Over at Anderson-Dean Community Park, the cost of throwing a two-hour pool party has gone from $250 to $265, but the staff has still not worked out how much it would cost to rent a park shelter for an event.