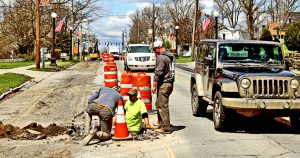 The one street in Harrodsburg everyone agrees needs work is College Street, which is actually a state road. State crews are due to start repaving in July.

The Harrodsburg City Commission has announced an ambitious street paving program this year. The city will spend twice the money repairing and resurfacing city streets—over half a million dollars—than was spent last year.

This year, the city intends to spend around $250,000 from municipal road aid toward paving Commerce Street from U.S. 127 to the joint, Broadway from Fort Street to Magnolia Street, Goddard, Sims Street from Tabler to Marimon, Greenwood Drive, Fairway Drive Loop and Lynn Drive from U.S. 127 to Ada.

In addition, the city will repave 40 feet of East Factory and 127 south of Factory to repair damage from an accident earlier this year.

Around $250,000 in sewer and water funds left over from the recent renovations will be used to pave Tabler, Cross Street and half of Cardwell, North East Street.

The list was compiled by Commissioners Charlie Mattingly and Marvin “Bubby” Isham. Mattingly warned that some streets may be subtracted from the list if there are not enough funds for all the repairs.

The city will advertise for bids for street repairs. The paving will not begin until September.

In somewhat related news, the city also heard a complaint from Paul Cornish, who said that even though contractors finished utility work 10 months ago, his yard still had no grass.

Cornish said he wanted his yard repaired, preferably with the same kind of grass that was originally in his yard.

“Will you please come out and fix my yard?” he said.

Commissioner Mattingly said he would get the contractors back to fix the issues.

“I will take care of it,” Mattingly said. “I will work on it in the morning and they will be back.”

The next meeting of the Harrodsburg City Commission will be Monday, July 9, at 7 p.m.