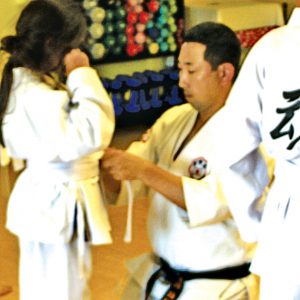 Shinji Matsuda helps a student with her belt at MAFEW before class. While his style of karate may be used for self-defense, it is more than that, he said. “Karate teaches self-respect and discipline,” Matsuda said.

Shinji Matsuda of Danville, who has been teaching the martial arts around Harrodsburg for 18 years, is appearing in a revival of the ’80s classic, “the Karate Kid” called “Cobra Kai.”

Matsuda plays a corner judge during the 50th Anniversary All Valley Under-18 Karate tournament, which some may remember from the climactic scene of the 1984 film.

The show, which began airing on Youtube Premium on May 2, picks up the lives of Johnny Lawrence and Danny LaRusso—played by William Zabka and Ralph Macchio—34 years after the original movie. The rivalry between the two is reignited when Johnny reopens the Cobra Kai studio.

Much like the characters in “Cobra Kai” have grown from students into teachers, Matsuda also imparts the lessons he learned from Koda to another generation of karate kids here in Harrodsburg.

He leads beginner and intermediate classes for U.S. Yoshukai Karate on Tuesday and Thursday evenings at the Mercer Area Family Education and Wellness (MAFEW), formerly known as the YMCA.

The cost of the classes is cheap, $40 a month, but the lessons his students learn are priceless, he said.

“Karate teaches self-confidence and self discipline,” Matsuda said. “I teach the original Japanese style that is about honor. Yes, it helps in self defense but is more than that.”

For more information on karate classes, contact Matsuda at shinji_dmc@yahoo.co.jp.