Major Will Finish Out Term; Will Not Seek Reelection In November 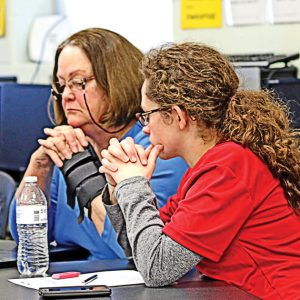 Donna Major, who has served on the Burgin Board of Education since 1995, has announced she is not running for reelection. Major said interacting with students like Cassie Hunter, who served as student representative on the school board this year, is her fondest memory.

It’s the end of an era for the Burgin Board of Education. Donna Major, who has served on the board since 1995, announced at last week’s board meeting she will not be running for reelection this year.

“We’ve got a really good board,” Major said. “I think it’s time to give someone else the opportunity.”

Major is not a native of Burgin. Born in Miami, Florida, Major’s father worked in management for the railroad. By the time she graduated high school, she had attended 10 different high schools. She moved to Kentucky to attend college and she said she put her foot down. She and her family moved to the friendly little city in 1987. Major said she liked it because the Burgin Independent School District had a good reputation—her daughter Jill had just turned three—and they liked living near the water.

When she joined the board of education in 1995, Major said her mission was to keep the financially struggling school open if she had to “sell every pull tab and every bingo card in the state.”

She wasn’t joking. Major, along with Burgin librarian Ellen Stevens, organized bingo games to keep the doors open. “We had a lot of little old ladies playing—heavy smokers with their troll dolls for good luck,” Major once recalled.

Her main duty on the board was to serve as the head bean counter, making sure the school remained on a financially solid footing. “It’s very hard on the education if the system is teetering,” Major said.

During her tenure, Burgin Independent has made a miraculous turnaround. Enrollment has grown from 352 in 1998 to over 500. Last year, Burgin ranked third out of seven nearby school districts and has been labelled a district of distinction by the state.

“It’s been a lot of fond memories,” Major said. She said she especially liked seeing how the students succeeded thanks to the decisions the board made. “It’s just very impactful to me to do something, as small as it was.”

Major said she would have left the board earlier, but stayed in order to guide Will Begley through his first year as Burgin’s superintendent. With that accomplished, she thinks it’s time to give someone else a chance.

Her advice to her replacement? It’s not about you. It’s about the students. “You can’t use it for your own personal wishes or the wishes of your children,” Major said. “That’s one of the most important parts of being a school board member.”

Major said she had planned to travel after stepping down from the board, but those plans are temporarily on hold. She’s currently serving as a nurse to her husband, who broke several vertebrae in his back after falling from a deck.

Burgin has one of the longest serving school boards in the state. Chairman Bob Clark has served since 1987 while Vice-Chairman Keith Monson has served since 1990, Priscilla Harris has served since 2002 while the newest member, Ben Bradshaw, was elected in 2016. Major has nothing but good things to say about them. “They’re doing it for the school,” she said.