Shadarno Clarke is the second Galilean Eagle in as many days to sign a college basketball letter of intent. The 6’7” forward has already received high praise from his new coach.

“Shadarno has the mindset and body of a college athlete,” Campbellsville University-Harrodsburg Head Coach Herve Kouna said of his latest signee.

“He understands that it will take extra work on and off the court to be successful as a student-athlete. He will play a major leadership role on our team,” said Kouna.

“Our program aims to provide students an experience in college athletics while making sure that they get their degree,” Kouna added.

“I believe that Shadarno will make the best of this opportunity. I believe his work ethic and drive to be an excellent student will make him a great fit to our program,” he said.

Clarke was a double-double waiting to happen on a balanced Galilean Christian team the last two years where the Turks and Caicos product won a state championship and went to two KCSAA State final fours.

He averaged 10 points and nine rebounds per game over the course of his two-year career at GCA coming off the bench. Clarke started his final game in a Galilean uniform at the NACA National Tournament and turned in a 20-point, 17-rebound performance. The freshly minted college basketball player led the Eagles in field goal percentage in both of his seasons at Galilean including a school record 68% last season and 65% this year.

“Shadarno is more than his stats,” Galilean head coach and athletic director Scott Jones said. “He is such a great young man that understands what it means to be a student athlete. He works really hard in the class room and on the court. He will be greatly missed around here.”

Clarke, an American citizen born in Florida, attended school in the Turks and Caicos Islands where the scholastic expectations are not the same as here in the United States. Though Clarke was able to post over a 3.0 GPA in his two years at Galilean after tutoring and small class size really helping prod his work ethic, he still didn’t quite meet NCAA qualifications and was close to meeting NAIA standards. He completed 12 credit hours in the dual-credit program at Galilean with Campbellsville University which allowed the school to see his academic progress. Now, CU-Harrodsburg has picked up an athlete with a division-one body and tremendous upside.

The Rising Stars Basketball Club in Turks and Caicos, under the direction of Mervin Forbes, helped get Clarke moving in the right direction, learning the game and in his two years at Galilean, Shadarno grew in leaps and bounds on the court and, of course, in the class room.

“There have been a lot of people that have helped me get to this point,” said Clarke. “I want to, first, thank God for all of this. He helped me and my family get me to a great school in Galilean. I am thankful for the time that coach Mervin Forbes (TCI Rising Stars) put in to get me going. Coach Scott Jones and the staff at Galilean really helped me a lot. All the teachers there put a lot of work in when I needed help with my studies. I am excited to represent the Turks and Caicos Islands, my family, Galilean and everyone in this next chapter.”

“I think joining CU-Harrodsburg is a great fit for me,” Clarke added. “It is a good, Christian environment and I really like the academic program as well. I am really looking forward to furthering my education and my basketball career. I am very grateful to coach Herve and Campbellsville for this opportunity.”

Clarke will make a transition from a pure forward to more of a wing-forward hybrid called a stretch four at the college level which fits in great with his new coach.

“I was once in Shadarno’s shoes,” Kouna explained. “I had raw basketball abilities, but I could barely speak the language. It was a long process to adapt myself linguistically and athletically. Shadarno doesn’t have the language barrier, but will be going through the athletic transition. The key words are to trust the process. Shadarno has the potential as long as he trusts the process and then he will be able to show his true colors.” 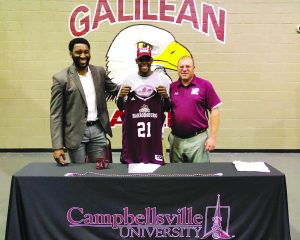