Paving On College Street To Begin In Two Weeks 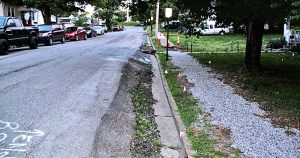 The City of Harrodsburg has set aside $500,000 for street repairs this year, more than twice what was spent last year. But some streets being considered for repairs—like Marimon Avenue, which needs to be milled down to the roadbed—could use up a lot of that money. “It won’t take long to spend $500,000,” said Commissioner Charlie Mattingly.

Harrodsburg residents are fed up with the condition of city streets. But a solution might not be right around the corner.

While repairs on streets damaged during utility work should begin within the month, Commissioner Charlie Mattingly, who oversees the city’s public works department, said work on other city streets would not begin until September or October.

“Right now, we’re working on a list to present at the next city meeting,” Mattingly said. He and Commissioner Marvin “Bubby” Isham are compiling a list of the streets that need work the most.

The commissioner listed off some streets—Marimon Avenue, East Office Street and Greenwood Drive—that desperately need attention. While the city has set aside $500,000 for street repairs, more than twice what was spent last year, Mattingly said the money would only go so far.

Mattingly said Beaumont Avenue, which does not have a proper roadbed, needs millions of dollars in work done. As a result, the city would not be doing anything with that street this year. Marimon needs to be milled down to the roadbed and resurfaced, which would cost around $25,000, he said.

While work is supposed to start on some state roads like College Street within the month, paving on city streets will not start until September.

Some of this year’s funds are left over from the city’s project to renew the water and wastewater treatment systems. That money could only be spent on streets damaged by utility work, he said.

Mattingly said the contractor who made the cuts on North Main Street has already started repairs. In some cases, they will pave from curb to curb, but in other cases they will only make patches, he said.

On Monday, the Harrodsburg Herald posted on Facebook asking city residents which streets needed to be repaved. The most popular answer, by far, was College Street, a state road which was torn up this winter during utility work.

Mattingly said state contractors are supposed to start work on College Street in two weeks. They are repaving from the old Swifty gas station to the Dairy Queen, he said.

The commissioner said he gets calls every day from residents.

“I feel for the citizens,” Mattingly said.

He also doesn’t like waiting so late in the year to start paving, but the city’s new budget doesn’t go into effect until July 1. He said last year, contractors were still paving in November.

“I believe asphalt’s got to have at least two weeks to cure,” he said.

Mattingly and Isham will present their list at the next meeting. He asks the public for their input.