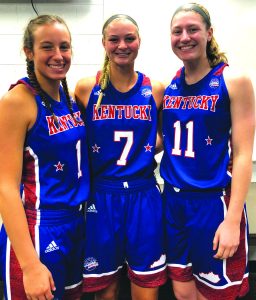 After Kentucky won the first game for boys (100-89) and girls (92-87) on Friday, Indiana rallied and took the win in both games in their home state.

“Wearing that jersey meant a lot to me, but maybe even more to my family and the program. I don’t know that I’ll fully grasp how big of a deal that is until later in my life,” said Robins. “Playing in this game was an awesome experience. I was able to get closer with players I didn’t know very well and create new relationships with coaches and players. The atmosphere of those games were incredible and the Kentucky fan support was awesome.”

Robins had already started working out at the University of Louisville, where she committed during her junior season. Souder will soon be heading to Northern Kentucky University (NKU) and Davis will be attending the University of Tennessee-Martin.

“Playing in the all-star game definitely made me have state tournament flashbacks. The atmosphere was incredible to play in and the fact that I was representing the state of Kentucky made it all more special,” said Souder. “For me, it was super sad to know that I wouldn’t get to play in another game with my high school teammates, so I really didn’t want the Kentucky all-star week to end. It’s going to be an adjustment not having them there with me all the time, but I think we’re all excited for this next step in our basketball career.”

Davis also talked about the experience and getting to play with Robins and Souder one last time.

This was the first time in the awards’ history that both winners came from the same school.

Faulkner scored 10 points in Kentucky’s win on Friday night, and scored 12 points in the loss the following day.

“It meant a lot putting on the number one jersey and representing the state of Kentucky. It was just a blessing being able to go out there and play against that competition and compete to get the win on Friday. It was a very special moment for me and my family,” said Faulkner.

He will soon be attending NKU and has already started working out with the team.

“Things at NKU have been good so far. I’ve been pushed like I never have been before,” he said. “The coaches are really intense and push me to be great every day we are on the floor. It’s been a very good experience and I can’t wait for the season to start,” he said.