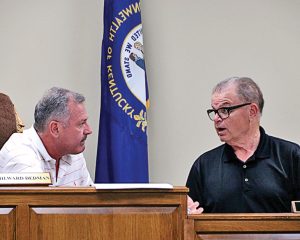 Mercer and Boyle Counties have formalized an agreement to reduce Mercer’s share of jail expenses.

At last week’s meeting of the Boyle-Mercer Joint Jail Committee, both counties agreed to amend the interlocal agreement, which will allow Mercer to pay a smaller share of operating costs at the Boyle County Detention Center.

The change in the cost-sharing ratio could save Mercer around $84,000 next fiscal year, according to Boyle County Treasurer Mary Conley.

Mercer officials have complained for the past year that they have been paying too much toward the jail. The interlocal agreement that was ratified by both counties’ fiscal courts over 20 years ago establishes a floor of 35 percent for Mercer based on its percentage of the jail population. But the county has not had more than 29-percent of inmates in the jail for years.

The new agreement sets the ceiling at 27-percent. However, Mercer will continue paying 35-percent of jail costs through December and 30-percent until June 2019. After that, Mercer’s share of jail expenses will be calculated according to the population for the year before.

In addition, Mercer will pay Boyle County Fiscal Court $36,000 every year in management costs and will continue paying 35-percent of the jail’s construction debt until the bond is retired in February 2019.

According to Conley, Mercer’s contribution to the jail budget will drop from $883,198 to $799,189 in the new fiscal year while Boyle’s contribution will increase from about $1.64 million to almost $1.66 million.

The agreement still needs to be approved by the state and by both counties’ fiscal courts. Once approved, it would take effect Jan. 1, 2019.