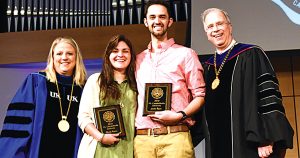 Ingram and Rogers were honored at the annual Awards and Honors Day this May. They graduated in with bachelor’s degrees. Both were involved in student works and have been on the dean’s list. Ingram will pursue a master’s degree in social work while Rogers plans on becoming a middle school social studies teacher. Campbellsville faculty and staff “vote for students based on their scholarship, leadership, character and potential success,” according to Michael Carter, president of the university.

Gene and Jan Parrott Robinson of Burgin were honored with the title of Mr. and Miss Campbellsville University 60 years ago, adding a unique perspective on the award. Mrs. Robinson received her associate of science degree in social studies in December 2017 after almost 60 years. 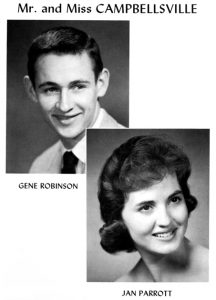 “Watching her receive her diploma this past December and realizing that she lives in Burgin, the community I grew up in, I feel like it adds a twist to receiving this award, Ingram said. “Then, to receive the award alongside Landon, who I have gotten to know quite well in my time here, and lives about five minutes from my parents’ house, just added to the whole effect.”

Rogers said the Robinsons live near his family in Burgin.

“I think that it is too cool to have our little town represented this way,” he said. “It’s not very often that Burgin shows up the way that it did at Awards Day,”

Campbellsville University is a Christian university offering over 90 programs of study. For more information, visit their website campbellsville.edu.