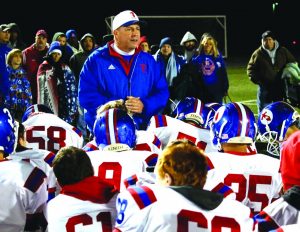 Mercer County Titans head football coach David Buchanan (middle) talks to his team after a loss to Collins High School in the regional title came this past football season. (Photo by Arpan Dixit)

In David Buchanan’s fourth year as the Mercer County Titans head football coach, he has proven to be a leader. In the previous two seasons he has led his teams to the regional championship game.

Buchanan is changing the culture of Mercer County football and plans to win the second state championship in school history and first is more than ten seasons.

His dedication to football is obvious, but what the public doesn’t see is worth recognition as well.

“My job in Mercer County Schools is 100-percent to help kids and I really enjoy that,” said Buchanan.

He is also the random drug testing coordinator at the high school and his objective is to help create a better experience for the kids and to ultimately help with the prevention of drug use.

Buchanan is also the school’s outcomes coordinator, otherwise known as dropout prevention. “I just enjoy working with kids to try to encourage them to stay in school and do the best they can,” said Buchanan.

He believes one’s relationship with their father is important and runs the “all pro dad day” program. The program is an attempt to get a father into their kids’ lives to have a better relationship and to get the best out of the student.

In addition to his many responsibilities at the high school, Buchanan plans to teach leadership classes, by instructing small groups of people how to be more organized and efficient and eventually to be leaders in the community.

Every day between classes you can find the coach standing by the office making sure the students are doing their best. He is constantly putting himself in the best position to lead and that really sums up his job at Mercer County Senior High school: a leader.