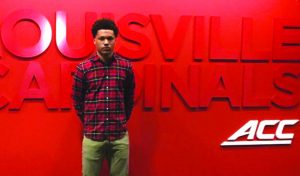 It’s every student-athletes dream to extend their career and play at the next level.

Johnson committed to the University of Louisville over the weekend and is excited about the opportunity not many student-athletes get.

“I chose U of L because when I went there for my visit, I really liked the campus. Everything was new and modern. The classes weren’t too big and it’s not that far from home,” said Johnson. “The track team is successful and I feel like the Athletic Coast Conference (ACC) is a competitive conference in track and field with schools like the University of Miami, the University of Clemson, Florida State University and the University of North Carolina. I will definitely be pushed, which I love, but the deciding factor for me was how nice the coaching staff was and how much effort they put into recruiting me since my junior season.”

Johnson said his recruitment really started to pick up after his junior season, when he won the state championship in the 300 meter hurdles, the 110 meter hurdles and the high jump.

“The letters started coming in after I won state in three events last season. They would contact one of my parents, set up a visit and after the visit, schools would keep in touch weekly,” he said.

Johnson said he felt overwhelmed, but it didn’t let him lose focus on his task of coming back stronger during his senior season.

“It was a lot to juggle between practice, school, meets and visits,” he said.

He raved about the Louisville coaching staff, led by Dale Cowper. Assistant Coach Brooke Rasnick was also very influential in his  recruitment.

“They really showed interest in me and started coming to my track meets all year. I first had serious conversations about my future with Coach Rasnick in January at an indoor meet. She told me Louisville would be interested in recruiting me as a decathlete,” said Johnson. “Coach Cowper was very nice and down to Earth. He was very easy to talk to and most of all, he believed in me.”

Johnson said Cowper came to visit him on his youngest son’s birthday, which showed him he was really interested.

A decathlete, as Johnson will be in college, will compete in 10 events in two days. The events include the 100 meter dash, long jump, shot put, high jump, 400 meter dash, 110 meter hurdles, discus throw, pole vault. javelin throw and the 1500 meter run.

He said this opportunity would not have been possible without his family.

“The support from my family and friends through this process has been great,” he said. “They all wanted me to stay close to home but would have supported me no matter where I decided to go to school. They were extremely happy and proud when I told them I chose Louisville, but I was happy because they were happy for me.”

Johnson’s dad, Michael Johnson, couldn’t be more proud of his son and couldn’t wait to see the impact his son is going to make at the next level.

“It’s been crazy to see him blossom into the young man and student-athlete that he is. It seems like yesterday he was coming up the ranks and I blinked twice and new he’s going off to college in a few months,” he said. “I’m very excited to see what he’s capable of in college.”

Aaron is still only 17 years old, with a birthday in September, so during his first few months of school, he will be one of the youngest student-athletes on campus.

“He’s achieved a lot in a short period of time that it’s hard to appreciate one for too long,” his father said. “Because he’s so young, it’s scary to see what kind of athlete he’ll be in two, three and even four years. He wants to win ACC freshman of the year so I’m going to try my best to push him towards that goal.”

Part of becoming a successful athlete is setting high goals, and Johnson definitely has lofty ones.

Johnson has succeeded in track every year, and college should be no different with his work ethic and desire to be great.

Johnson couldn’t thank his high school coaches enough for getting him to this point.

“Coaches Terry Yeast and Lynn Flach have been a big help throughout my career. They push me harder every practice. Coach Yeast would tell me ‘you’re good, but if you want to be elite, you’re going to have to push yourself harder.’ He also goes out of his way to give me the opportunity to be seen and run against elite talent by entering me in big track meets around the state and country,” said Johnson. “My coaches taught and trained me like I’m already in college because they want to prepare me for the next level. I’m so grateful to have had him and coach Flach with me these past four years.” 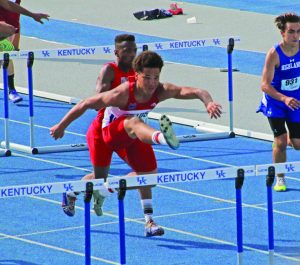 Johnson competing in the 110 meter hurdles at the Class AA track meet at the University of Kentucky during his junior season. (Herald File Photo) 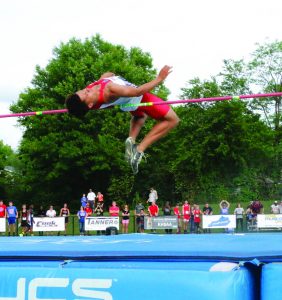 Johnson competing in the high jump event at the state track meet. (Photo by Arpan Dixit) 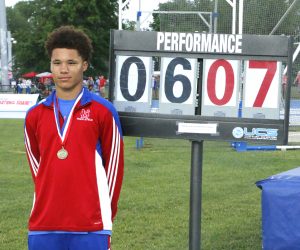 Aaron Johnson won the high jump at the Class AA state track meet during his junior year with a 6-07 jump. (Photo by Arpan Dixit)