Since taking over the Mercer County track and field program in 2014, Head Coach Terry Yeast has had consistent success.

He was also a successful student-athlete in high school at Harrodsburg High School, winning an individual state championship in the 200-meter dash and another as part of the 4×400 meter relay team.

He is now re-establishing the standards for track at Mercer County as well as restoring pride in the track program.

Yeast commitment to win goes back to his time with  Alvis Johnson, the legendary coach at Harrodsburg High School, who won five overall track and field state championships with the Pioneers.

Yeast’s coaching achievements are directly associated with his experience as an athlete under Johnson.

“He (Johnson) was very tough and hard core, but he was fair,” said  Yeast.

From the many intense workouts to the way he builds his relay teams, Yeast has learned a lot from Johnson and credits much of his coaching success to the example he set for him.

In roughly 20 years of coaching, Yeast has had to adapt. ‘His way or the highway’ was the philosophy of his coach, and it was a system Yeast practiced early in his career, but later had to change.

Yeast credits the change to modern society. Certain compromises have become necessary to coach in order to have more kids on the team.

“If there are fewer kids, that’s fewer people for me to effect, and I think it’s important to try to have a positive effect on young people,” said Yeast.

Sometimes biting your tongue is needed to get the best from an athlete, which runs contrary to  what coaches did when Yeast was an athlete.

“Now, it takes truly a team to be competitive, you need more players,” said Yeast. Years ago, two or three great athletes could win a title at the state meet. But track and field has become much more competitive.

“The way you prepare to be successful has changed because there are so many more competitive athletes in the country,”  said Yeast.

Through all the change and adversity that comes with coaching a successful program, Yeast is still setting the bar high.

Despite winning two state championships on the boy side, Yeast still has more goals he wants to accomplish.

“I want to build a dynasty at Mercer County by bringing home several championships over the next eight years,” he said. “I also want to get more kids into college as track athletes.” 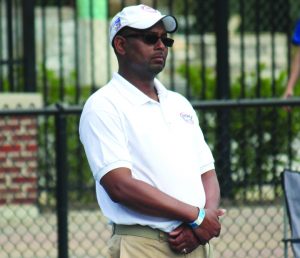 Terry Yeast has led his boys track team to two state championships, along with a runners-up trophy for the girls side. Yeast credits his coaching style to that of legendary Harrodsburg High School coach, Alvis Johnson. (Herald File Photo)