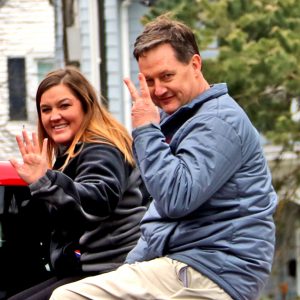 Chris Souder (right), who resigned as head coach of the Lady Titans basketball program this week, is pictured with assistant coach Hayley Spivey during the Lady Titans parade downtown in April. (Photo by Arpan Dixit)

It is truly the end of an era for Mercer County Lady Titans basketball.

Souder accepted a position as an assistant coach at Indiana State University (ISU) in Terre Haute.

“It was an opportunity I just couldn’t pass up,” said Souder.

He notified The Harrodsburg Herald and other media outlets via  text message early Monday morning.

“ISU was just an opportunity that basically came because of the strength of our program at Mercer County. It is definitely one of the things you tell your kids, to always give your best because you never know who is watching,” said Souder.

Vicki Hall, who was an assistant at the University of Toledo last season, recently took the head coaching job at ISU and contacted Souder shortly after.

“Coach Hall was recruiting Emma Davis and Emmy Souder last season and loved the way we did things, so it kind of came in to play when she got the ISU job and was looking for another assistant,” said Souder. “I told the girls the morning I took the job that most of them have dreams of playing college basketball and I have always had a dream of coaching college basketball. The opportunity came about and I just felt like it was something I needed to try.”

Souder said he will focus on recruiting, player development and offense at ISU.

Despite leaving for another job, things will look quite familiar, he said.

“Coach Hall wants to play a style similar to what we played here at Mercer,” he said. “Kind of a modified dribble-drive offense.”

This is Souder’s first time coaching basketball full-time and he is excited for the opportunity.

“It is pretty neat that basketball will be my full-time job,” he said. “It is going to be different, but something I have wanted to try for quite some time.”

Along with being the head man for the Lady Titans, he was also the principal at the Mercer County Day Treatment Center, which serves students with behavioral and academic difficulties.

Souder is coming off two historic seasons at the helm for the Lady Titans. They compiled a record of 67-9, going 27-0 in region and 9-0 in district. The last region game the Lady Titans lost was to Southwestern in February 2016, and their last district loss was to East Jessamine in February 2008.

Mercer has won 97-percent of their district games and 80-percent of region games under Souder.

He leaves as the most successful coach in Mercer County history and will be starting a new chapter next season.

“The program has blossomed fully and I am confident that it will move right on and chances for more championships are on the horizon,” said Souder.

He has coached 2018 Miss Kentucky basketball winner, Seygan Robins, who also won back-to-back Sweet 16 MVPs. Along with Robins, Souder coached Faith and Lexy Lake, Emmy Souder and Emma Davis, who are all going on to play at the college level.

“Those five seniors are so special to me,” he said.

Souder doubts an opportunity like this would have come along if it weren’t for those five standout seniors.

“If it were not for those seniors, I probably would not be getting this opportunity,” he said. “They are such high-character kids, that they will succeed in anything and everything they do. They are just a very special group. They have not stopped working since the season ended so they will be ready for the next level.”

Two key players from last season, Toni McCombs and Channing Lewis, will be two of the most important pieces for the Lady Titans in the 2018-2019 season.

“The program is in good shape. That’s what we tried to do. We wanted to build a program and not just a team,” he said. “I told them to fight like hell and stay on top of the mountain. There is still plenty of talent there and they just need to continue to outwork everyone on and off the court.”

Souder said despite taking a new position, he will always keep close tabs on the Mercer program, and said he might even be recruiting girls to ISU someday.

Mercer is well-known for the support the community gives their athletics. Souder was more than appreciative of all the support he has received over the years from his family, friends and the community.

“There is no way I could even come close to pulling this off without the support of my family. They were quick to let me know that they approved 100-percent of this opportunity. I am just very blessed to have such a strong family,” he said. “I just appreciate all the support this community has given me and this program over the years. I will never forget where I came from and where it all started.”

The coach talked about what he will cherish the most during his time at Mercer.

“All the championships are really nice, but what I will cherish the most is the relationships that have been formed over the years,” he said. “I have been here for 19 years, so this was a very difficult decision. I love this school and program.”