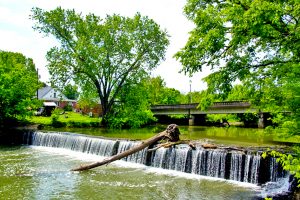 Four mills once operated along the Chaplin River in Cornishville, but the community has been in decline since 1900.

Cornishville residents returned to the Mercer County Fiscal Court for a progress report about the neglected homes that blight the small community on the Chaplin River.

Last year, the residents demanded the fiscal court condemn the properties and demolish them. County officials say there are about a dozen abandoned and neglected properties in Cornishville, including an abandoned Masonic Temple, that need to come down.

But tearing down the properties is not that simple.

Mercer County Attorney Ted Dean said he is still negotiating with the Masonic Lodge to demolish the former lodge. Dean said he was waiting for a court order before another property could be demolished.

One of the underlying causes of neglected homes is the aging population. Dean said the owners of some of the worst properties were of advanced age. One owner of multiple properties is currently a nursing home resident. Dean said it would be pointless to drag the man, who is in his 80s, into court.

“We’re going to have to go a different route,” he said.

While the properties are all for sale, Dean said their “strong prices”—as well as the fact that most of the properties have tax liens against them—were scaring off potential buyers. Dean said he was talking to the holder of one owner’s power of attorney about possibly dropping the prices.

He said Jailer Bret “Chambo” Chamberlain, who has been medically cleared to return to work after back surgery, would go out to Cornishville with people serving community service some time this week, weather permitting, to clean up some of the properties.

The county will bid out mowing for the neglected properties, Dean said. 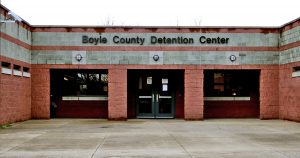 Mercer and Boyle Counties have agreed to lower the percentage of jail costs Mercer County has to pay.

The Boyle County Fiscal Court voted last week to approve the new jail budget, which will reduce Mercer County’s contribution at the beginning of next year.

Boyle and Mercer have been renegotiating their interlocal agreement, which divides jail costs based on the percentage of the jail’s population each county provides. The agreement sets a floor of 35 percent as the smallest amount Mercer can contribute but the county’s actual percentage of prisoners has been under that amount for years.

A proposed amendment to the agreement sets the floor at 27 percent. Boyle officials are reviewing a proposal from Dean which they will vote on at the next meeting.

Under the new budget, Boyle will pay $8,000 to cover the costs of prisoner transports from the jail to the Boyle County Courthouse. Mercer will pay $36,000 in administrative costs per year to run the jail.

Mercer has not made the same moves because they still don’t know what they’re going to do about the jail, which is over 20 years old.

“I didn’t want to give anybody the impression we were going to do something drastic before we heard the report,” said Mercer Judge-Executive Milward Dedman.

Brandstetter Carroll, the consultants hired to perform a comprehensive study on the jail, are due to deliver their report at the July joint jail committee meeting. The final debt payment is due February 2019.