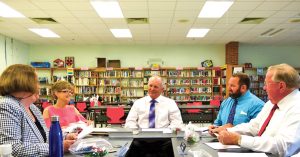 Burgin Independent and Mercer County Schools have submitted their tentative budgets for the upcoming school year.

Burgin Board of Education

The Burgin Board of Education met right before graduation last Friday to approve renovations to Burgin Independent’s bathrooms.

The board agreed to spend $191,000 to redo the bathrooms on both floors, which have not been renovated in over 50 years.

At their last regular meeting, the board approved a $3,844,355 tentative budget for 2019 fiscal year. However, most of the meeting was about graduation.

Mercer County Board of Education

The Mercer County Board of Education approved a $20-million tentative budget for the new school year.

The budget has a 6.7-percent contingency. Despite a 2.3-percent increase in the district’s contribution to the County Employees Retirement System, expenses have been cut $811,083, according to Finance Officer Amber Minor.

The tentative budget will be sent for approval to the Kentucky Department of Education, but Minor reminded the board they would have to make some hard decisions in August, when the school’s working budget has to be submitted.

The budget only includes a cost of living adjustment in employee pay, but not a raise increase until they get a clearer look at school finances in August. Waiting so long complicates bookkeeping, because the district has to start paying all employees on August 15. Putting off the decision complicates calculating retirement and other benefits.

Superintendent Dennis Davis reassured staff that the administration had not made a final decision yet.

“We haven’t decided NOT to give a raise,” Davis said.

The budget will also include stipends for anyone who signs a contract to be a full-time bus driver starting on July 1. Davis said the district has had problems recruiting bus drivers. In May, he said there were at least three days when the district had to combine routes because there were not enough drivers even with district mechanics filling in.