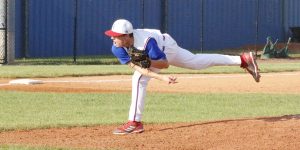 Sophomore Mason Smith pitched six innings against East Jessamine in the first round of the 46th district baseball tournament on Tuesday, May 22, but earned a no decision. (Photo by Arpan Dixit)

Beating a team three times in a season is tough. That task haunted the Mercer County Titans (14-11) baseball team against the East Jessamine Jaguars (8-16) at the 46th district tournament on Tuesday, May 22, as the Jaguars ended the Titans season with a 5-4 victory, scoring on a balk and stealing home plate, to secure a spot in the 12th region baseball tournament.

The 46th district tournament was hosted by East Jessamine.

Zac Perrin earned the win for the Jaguars, pitching three and two-third innings, giving up one run on three hits, with three strikeouts.

Head Coach Adam Shartzer talked about his seniors and their impact on the program after a tough loss to end their high school careers.

“I love this senior class. I really got to know them my first year with the program at the junior varsity level. They all work extremely hard and are never satisfied. Their hard work and dedication to the program will definitely leave a lasting mark,” said Shartzer. “They were the first ones in and the last ones to leave every practice. Not only are they great baseball players, but also great young men. I’m excited to see what the future holds for them.”

The weather disrupted the start of the this game on Monday, May 21, when the game was called due to lightning. It was postponed until the next day and the Titans had to play already down 2-0 in the first inning.

East Jessamine scored their first two runs on RBI from Perrin and Cam Thompson. The Jaguars took a 3-0 lead on a line drive single by Kade Greathouse in the second inning. Despite the poor start, the Titans never quit.

Both teams cruised until the seventh inning, which proved to be a forgettable one for Mercer. Sophomore Dillon Warren relieved Smith on the mound, but quickly walked three batters to load the bases up with one out. The hard-throwing righty, Andrew McGinnis, was brought in to get the final two outs. That’s where the drama unfolded.

McGinnis balked, scoring Storm Wilson to give East a 4-3 lead. The very next pitch, Ben Thompson stole home to give his team a two-run lead with half an inning left to play. It was an unfortunate series of events for the Titans.

Shartzer told his team to not fold and give it their all down two with three outs left.

“I told them to keep their energy up. That was a time when we couldn’t fold,” he said. “We’ve preached all year that is takes every single person in that dugout to win a baseball game.”

Irvin and Andrew McGinnis led the Titans in hits with three each. Armstrong led Mercer with two RBI.

Shartzer also talked about what the Titans could’ve done better throughout the year after the game.

“We could’ve improved defensively. It caught up to us in the end. We had some injuries and played some guys out of position, but were able to get by up to a certain point. I thought our pitchers did an outstanding job of throwing outs. We could’ve gotten ahead in the count more and stay out of straight fastball counts,” said Shartzer. “Offensively, our bats bailed us out all year We were patients and picked out spots well. Sometimes we just needed to come out hot instead of waiting until later innings.” 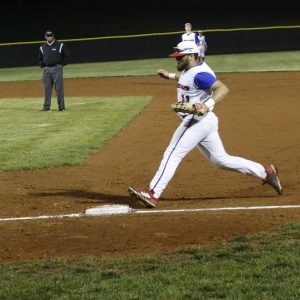 Senior Noah Irvin fields a ground ball and tags first base for the out. (Photo by Arpan Dixit) 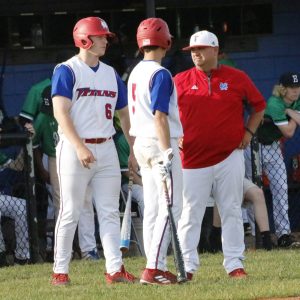 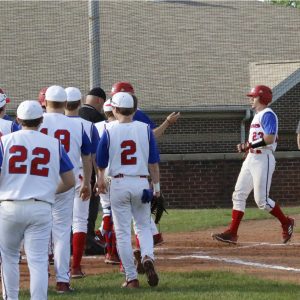 Senior Hunter Armstrong (right) is greeted by his teammates after hitting a two-run home run. (Photo by Arpan Dixit) 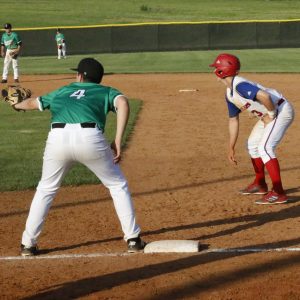 Senior Andrew McGinnis takes a lead off first base. (Photo by Arpan Dixit)