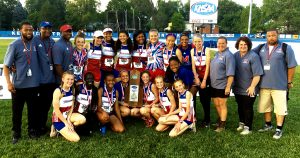 The Mercer County girl’s track team pose with their runner-up trophy at the Class AA Region 5 meet at Alvis Johnson Field on Friday, May 11. 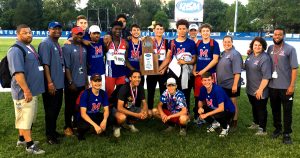 The Mercer County boys track team are pictured with their runner-up trophy after the conclusion of the Class AA state meet on Saturday, May 19, at the University of Kentucky. The boys program has finished the last three years with two state titles and a runner-up finish.

It’s been an unprecedented few years for the Mercer County track program.

Both boys and girls track teams finished second place overall at the Class AA state track meet at the University of Kentucky on Friday and Saturday, May 18-19.

Due to mother nature, a few events took place on Friday before thunderstorms hit the Lexington area. The meet was completed on Saturday after the conclusion of the Class AAA meet.

“We expected to finish in the top five, and to finish runner-up is pretty awesome,” said Head Coach Terry Yeast. “They have worked so hard and they truly stepped up in every event. I’m just overwhelmed and excited for where the future is going to go with this group of girls. The future is just ridiculous. Half of these girls haven’t even come close to reaching their full potential. I can’t wait to see what they accomplish in the next few years.”

The boys track team followed up back-to-back state titles with a runner-up finish while only having seven athletes compete. The Titans didn’t have anyone compete in pole vault, shot put or discus. Finishing second overall, under those circumstances, is very impressive.

“To finish runner-up with only seven boys is amazing. We came in an 18-point underdog to Lexington Catholic and we would’ve been proud to just finish in third place, but we just really performed in the events and scored 15 points more than we were expected,” said Yeast. “To finish knowing we needed to beat Catholic in the 4×400 meter relay to get that runner-up finish was icing on the cake. It’s one of the toughest coaching years that I’ve had because we are so young on both sides. We went from 25 seniors to six seniors, so that was a big adjustment. It just shows you that our coaches have been amazing and have done an awesome job getting our kids ready. I’m so proud of these guys.”

Four Titans, two each on the boys and girls side, were individual state champions.

Claunch has come a long way. Last season was her first season competing in track and now she is a state champion in the long jump (16-11.75) and triple jump (36-05.50). If it tells you how far Claunch has come in a year, she placed 11th in long jump and 13th in triple jump. She has put in time in the offseason, and it has really paid off for her.

“It’s one of the best feelings in the world. They were easily the two best wins I’ve ever had. I’m so blessed and thankful that God gave me the ability to run and jump,” said Claunch. “I’m still at a loss for words that I was able to accomplish that. Last year, I didn’t even make it to finals in either one of the jumps and after ending the season like that, I knew I wanted that state title. It’s such a great feeling and I’m glad I get to experience it, but I’m not settling. There’s still so much more work to be done.”

“I think proud is an understatement for how I feel about us finishing runner-up. Going into the meet we all knew we could compete for a state title and we did. It came down to the last two events,” she said. “We have a really young team and we are just getting started. I love the team so much and I couldn’t think of a better group of girls to have with me the next two seasons. Big things are in store for our program.”

Boyle and Mercer County girls were tied at 66 points with two events remaining, the 3200 meter run and the 4×400 meter relay. Boyle County’s Ally Anderson placed second to give Boyle County the state title, but that doesn’t take anything away from the Lady Titans. They have a very young team and they will compete for state championships in the coming years.

“It’s honestly a matter of staying humble to be and go out and practice like you’ve never won that title. Any one can take it away from you at any moment. My coaches have helped me in the process of staying grounded and staying head strong,” said Yeast. “You just have to have the drive to keep pushing to get better each and every day and never settle.”

Yeast said she still has a lot of things to work on and she has to go out there next season and break bad habits to reclaim the shot put title. She also talked about the opportunity to compete with and against her sister, Zharia.

“It’s pretty fulfilling to get to go head-to-head with my older sister everyday and knowing that I have the support of my family,” said Yeast. “I’m sure there is the different levels of thinking and we both want to come out on top, but it’s nothing but a little friendly competition at the end of the day. We’ll always support each other’s success no matter what and I’m just glad she’s been able to come along on this journey with me this year and compete at state.”

Seventh grader Jai Maria Piazza finished in second place in the 400 meter dash (58.13). That is really impressive for an athlete in middle school. Piazza will be one of the top athletes in her remaining five years for the Lady Titans and will be competing for many medals in the future.

“It felt really good to win state in the 110 meter hurdles for the third year in a row because that was my one of my goals after I won it my sophomore year. I practiced very hard for the 300 meter hurdles, even practicing on days like Sunday when there is no practice. I was pushed by coaches all year,” said Johnson. “They believed in me and pushed me to be the best that I can be so when I broke the state record on Saturday, it made it even more awesome.”

Johnson finished second place in the high jump (6-04.00), behind East Jessamine’s De’Anta Sanon, who had the same score, but completed the jump in his first try, whereas Johnson cleared it in his second try.

“To be a two-time state champion and a runner-up is awesome. I have the best team in the world. We support each other no matter what. If you’re an elite athlete or an up and coming talent, it’s all the same,” said Johnson. “What I will miss about high school track is having my family in the stands. I have a big family and they all come to every track meet and scream very loud to cheer me on. I’m going to miss that.”

Sophomore Lukas Jones placed third in the 110 meter hurdles (15.35). Jones is expected to be one of the front runners in the event in his last two years of eligibility.

“It means the world to me to be a back-to-back state champion in long jump. I just really enjoyed reaping the benefits of all the work I put in during this past season. I know many people may have gotten discouraged by not performing as well as they wanted to at competitions, but I’m just glad I was able to put my game face on and really show up when the big lights come on at the last meet of the season,” said Easterling. “My mindset coming in was that this was my last chance to leave everything in that jump pit and to not hold anything back. My jumps coach, Officer Morris, worked really hard on having a consistent start so I was not worried about my mark coming into the competition at all.”

Easterling said he is going to miss his time as a Titans and will cherish these memories forever.

“The process of getting better with all of my friends and having remarkable teammates to keep me going and push me harder in practice is what I’m going to miss the most,” he said. “We were always cracking jokes and have millions of inside jokes we can look back on years later and laugh.”

Senior Ty Divine had a dramatic finish in the 800 meter run. Divine was runner-up in the event (1:57.11) behind Boyle County’s Jackson Cox (1:57.05). It was the closest finish in any event at the meet and both competitors gave it all they had. Divine had the lead after one lap, but Cox made a late push in the last 100 meters and edged out Divine at the finish line.

“It was such a competitive race. I knew Jackson (Cox) would be coming strong the last 200 meters like he has all season long,” said Divine. “I couldn’t have ran any harder than I did in that race. The last two steps my legs just buckled and I fell. I talked to Jackson after the race and he said the same thing. That just shows you the heart that Jackson and I had and the commitment that we have put towards track.”

Divine ends his track career with a very impressive resumé. In his last two years of eligibility, Divine has won two state championships with the team and was named a state champion in the 4×800 meter last season with Chase Edwards, Garrett Dean and Marcus Lewis. This year, a runner-up finish in the 800 meter run, third place finish in the 4×800 and a runner-up finish as a team caps off a stellar career.

“I think it shows how great our talent is. With four out of our seven athletes that competed at state being seniors, it is crazy how we did what we did,” said Divine. “Coach Yeast has a great ability in getting the best out of everyone that comes through our program. It feels amazing to be part of such an awesome program, and especially a winning one that I have contributed to for the past three years. It was a bittersweet situation for me. I am sad that I have ran my last meet ever, mad that I couldn’t have finished those last two steps on the 800 and glad that I’ve been a part of this great team and program and getting to know some of the hardest working athletes that have come through Mercer County.”

Ballard and Divine, along with juniors Andrew Turpin and Toshi Smith, placed third in the 4×800 meter run (8:21.47). The Titans had the lead going into the anchor leg with Turpin, but Boyle County’s Jackson Cox made a rally during the last 100 meters to give Boyle County the state title in the event (8:12.78).

Lexington Catholic and Mercer County were tied for second place with the last relay remaining. After the Titans finished fifth, one spot ahead of the Knights, the finally tally was Mercer County 65 and Catholic 64.

The Mercer County Titan seniors on both sides have left a legacy that will be hard to top. It will be exciting to see what the next crop of talent will accomplish in many years to come.