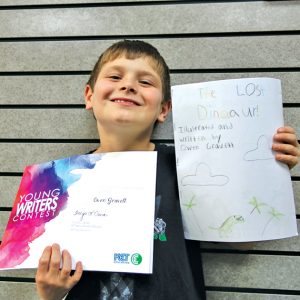 Local author Owen Gravett, a 2nd grader at Mercer County Elementary School, holds up his first book, “the Lost Dinosaur,” and the letter informing him he was one of the finalists in the KET Young Writers Contest.

Mercer County’s latest literary sensation is Owen Gravett, the author and illustrator behind the new book, “the Lost Dinosaur.”

It’s the first book for Gravett, 9, a 2nd-grader at Mercer County Elementary School.

He said he became inspired to write after meeting authors who came to read their works at the Mercer County Public Library.

Gravett’s book is called “the Lost Dinosaur” and it relates the adventures of Oscar, a young tyrannosaurus who becomes separated from his parents. Gravett said he selected the name Oscar because it sounded “human.”

During the three days it took him to write “the Lost Dinosaur,” Gravett said he tore up more pages than he ended up using.

He said he often got frustrated, but it was worth all the trouble. Gravett was named as one of 14 finalists in KET’s 2018 Young Writers Contest.

That’s not bad considering Gravett was competing against 1,200 other writers representing more than 280 schools from 17 states, according to the KET website.

It’s also not bad that he spelled pteranodon correctly, which is something this reporter was unable to do without using spellcheck.

Gravett said he has some ideas for his next book.

“I’m planning on either another picture book or a chapter book,” he said.

Asked if he wanted to be a writer when he grows up, Gravett picked his words carefully.