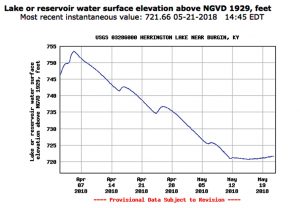 This chart from the USGS website shows the decline in the level at Herrington Lake since April. Many marina owners and recreational boaters would like to see more water. “We’re as anxious to get it up to 734 as anybody,” said Jerry Arnold, production manager at E.W. Brown Generating Station.

The ramps at Bartley’s Pandora Marina off Kennedy Bridge Road and Royalty’s Fishing Camp and Marina on Normans Camp Road are still open. There are boat ramps open in Boyle and Garrard Counties as well.

The water level at Herrington Lake is currently at 721 feet, around 13 feet under the summer level for this year. The water level was lowered to allow the contractor to work on replacing Kennedy Mill Bridge.

The work was scheduled to happen earlier in the year. The contractor, Walsh Construction Inc., asked Kentucky Utilities (KU) to hold the lake at 720-feet for at least 10 days to allow concrete to be poured. But the work was delayed because of all the rain in March and April.

After months of wishing the rain would end, many local marina owners find themselves wishing it would start again.

But Jerry Arnold, production manager of the KU’s E.W. Brown Generating Station, said it’s not that simple. Where the rain falls and the timespan matter just as much as the amount, he said.

“If it rains north of here, Herrington Lake won’t see it,” he said. The lake is fed by water coming from the southeast part of the state, around Rockcastle County, he said. An inch of rain in Lexington does nothing for the lake, he said.

The rain also has to fall in a fairly short time frame, he said. “It would need to be very fast,” Arnold said.

Three to four inches over two days could get the water level up to 734-feet. KU is not restoring Herrington to the summer pool this year to allow work to continue on the bridge.

However, three-four inches of rain over a week would not raise the water level enough so all marina owners could reopen their boat ramps.

Arnold said weather forecasts call for rain everyday from Saturday through next Thursday. Asked if that might be enough, Arnold said, “I would say yes.”

However, that could wash out the Memorial Day weekend.

The owners of the other local campgrounds want the public to know that, while their boat ramps may be closed, they are still open for business.

“There are other options,” she said. “Call ahead.”

The Tudors have lived in Mercer County since 1996. “This is a different season than normal,” Tudor said.

The scheduled completion date for the bridge is November 2019, but many local residents have been pressuring state officials to speed up the construction project.

While it might end up being a down season, Tudor said she tries to keep in mind that it’s for a good cause: a new Kennedy Mill Bridge. The old bridge, which is nearly a century old, has been closed seven times since it was built and four times since 2003. The state closed it earlier this year because they said it was not worth saving.

“We’re going to make the best of it,” Tudor said. “We’re just waiting on the rain.”

Check the current lake elevation by visiting the USGS website at https://waterdata.usgs.gov/nwis/uv?site_no=03286000.