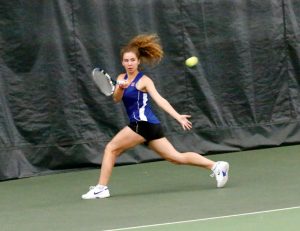 Freshman Rebekah Trent returns a shot during her first round match at the state tournament. Trent lost 6-0, 6-0 to Sarah Fazlagic of Kentucky Country Day on Thursday, May 17, at Lexington Tennis Club.

Winning a region title is a big accomplishment for a school that isn’t known for its tennis.

After capturing the 12th region title, the Mercer County girls tennis team competed at the state tournament on Thursday, May 17, at Lexington Tennis Club (LTC). Unfortunately, their season ended in their first match in singles and doubles.

Freshman Ania Boutin and sophomore Kiersten Bryant, who qualified for state by reaching the semifinals in doubles at region, were defeated by Samantha Bailey and Zoe Moellering of Notre Dame 6-0, 6-1.

The state tournament can be overwhelming for some, as competition is far superior at the state level than region.

Despite losing in the first round, the Lady Titans accomplished a lot this season, winning their first region championship since 2012.

Steve Lyons, who was in his first season as the Mercer girls tennis coach, couldn’t be more proud of the fight his girls showed.

“What I have learned from this year’s team is far beyond what I had ever asked for. All the student-athletes on the team this year are the smartest kids I’ve ever coached,” said Lyons.

“To say they are intelligent does not do them justice. While being smart in the classroom, they are equally as talented on the court. Their skills continued to improve and with their combined efforts, we were able to capture a 12th region title,” said Lyons. “I told them once, they are the daughters I never had and I meant every word of it.”

Despite winning a 12th region title, Lyons isn’t satisfied and wants to make a run at the state title as a team and individually.

“We have a lot of work to do over the next few years and hopefully the fruit we bear will achieve more success like the teams and coaches that led the way before us. We strive to build not just a good program here at Mercer County, but we will also strive to be a great program in years to come,” said Lyons.

It wasn’t just Lyons first year coaching tennis, it was his first year being around the game. He said he has soaked it all in and learned as the season went on.

“My first year in tennis has been grand to say the least. I have made new friendships with many different coaches, players and parents. I have gone from being a very direct coach to a quieter coach today than I was from many seasons past,” he said. “Our victories this season inspired us to raise the bar in the future and hopefully one day exceed their accomplishments. This will be a tough task, but one that hopefully will pay off when many players eventually make it back to the state tournament next season and beyond. It’s our goal, it’s our dream and it’s what we intend to do.”

The Lady Titans only lose one senior from this season and will have everybody back to compete for another 12th region title in 2019.

The tournament was originally supposed to be held at the UK tennis courts, but due to the fear of rain, it was moved to LTC off Tates Creek Road.