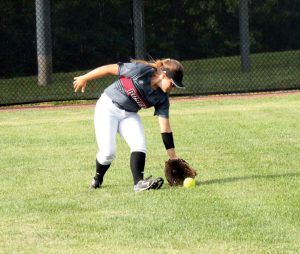 Junior Millie Hammons fields a base hit into left field during the first round of the 46th district tournament on Monday, May 21, at East Jessamine.

District tournament games are always tough, but the Lady Bulldogs (3-19) first round game Monday was made even tougher, having to go against the top softball team in the 12th Region, East Jessamine (25-2). Lady Jaguars starting pitcher Kaylee Terral went all three innings, striking out seven of the nine batters she faced.

Burgin’s third baseman Kelci Hammons was the only batter to reach base on an E4. In the top of the second inning, Hammons hit a blooper to the right side of the infield and hit off the glove of Lady Jaguar’s second basemen Madison Stinnett.

“Grace (Osbourn) is our senior pitcher and we’re really going to miss her; and her leadership and knowledge on the field,” said Burgin Head Coach Taylor Bottoms but I don’t think we have anything to be disappointed about tonight. The girls were eager to play, and I’m proud of them and the way the season ended.”

Osbourn went two innings, giving up 12 hits, two walks and earning two strikeouts. Hannah James hit a leadoff home-run in the bottom of the first inning to put the Lady Jaguars up early. East Jessamine added three more runs in the inning, two by Terral and one by Haylee Stansbury. Brylee Hage opened the second inning with a double to left field, before stealing third base and scoring on a wild pitch. Terral drove in her third run of the game to give East Jessamine a 6-0 lead after two innings.

James, Terral, and Stansbury all drove in one run each in the third inning and a two run shot by Brylee Hage gave East Jessamine an 11-0 lead with no outs in the third inning. With the bases loaded, right fielder Mallory McDowell blasted one over the right field wall, ending the game by run rule in three innings, 15-0.

Despite the loss, Bottoms was still positive about her teams attitude during the season.

“The biggest thing we focused on this year was making little strides,” said Bottoms. “We weren’t looking for any kind of district championships or anything like that, but just making and seeing improvement. We just have to keep growing, we’re very young. We’ve got some eighth graders that I’m looking forward to coaching and keep working with the middle school program we have and keep developing the program.”