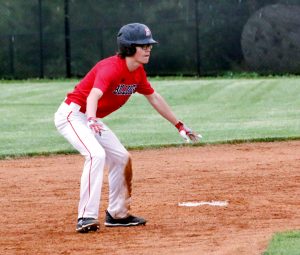 Burgin’s Jackson Qualls waits on the pitch at second base.

Despite losing to the number one seed in the first round of the district tournament 21-4 in five innings, the Burgin Bulldogs (8-9) put up a fight against the West Jessamine Colts (20-10).

Ethan Davis earned the win for West, pitching one inning, giving up no hits and no runs, with three strikeouts.

West scored their first run on an error by freshman Jackson Qualls at second base. They added three more runs in the first inning off a steal and RBI by Seth Taylor and Cole Hackney.

Burgin found themselves down 11-0 in the third inning when their head coach, Donnie Edwards, challenged them to compete all the way till the end.

Sophomore Matthew Kirkpatrick grounded out, but drove in Burgin’s first run. Reed singled on a hard ground ball to center field, scoring Jackson Qualls. Freshman Evan May stole home before Reed’s RBI. Burgin’s final run of the inning and game was earned on an error by Hackney.

“They responded well to the challenge and it says a lot about their character,” said Edwards. “When times got tough, we showed a lot about ourselves, answering back, just learning a lot of the small things you have to do on every play to compete.”

West scored 10 more runs within the next two innings to win the game in five.

Reed, junior Spencer Moore and senior Greg Korte had the lone three hits for the Bulldogs. Kirkpatrick and Reed drove in one RBI each to lead Burgin.

Jacob Cervantes led West Jessamine with two hits. Blake Crockett and Preston Howard were tied for the team lead in RBI with two each.

Burgin finishes the season 8-10 and Edwards couldn’t be more excited for the future of his program.

“I felt like our guys got better each week of the season with our understanding of the game. These guys have a lot of heart,” he said. “They truly have love for one another and our program took a big step this year in the right direction. If we continue to push each other and stay hungry, the future is bright.”

Korte was the only senior on the Bulldogs roster. Next season, they will have two seniors. Eli Stratton and Spencer Moore will be the leaders on the field in 2019, surrounded by loads of young talent.