After their first matchup got rained out over a month ago, the Titans and the Bulldogs were finally able to play a baseball game. The Bulldogs struck first, but the Titan beats heated up to defeat Burgin by a final score of 14-2, in five innings, on Tuesday, May 15.

“Offensively, I thought we did pretty well. We came out a little sluggish, took us a little while to wake up coming off a tough road trip to Wayne County the night before,” said Mercer Head Coach Adam Shartzer. “We have to get mentally prepared and focus on the task at hand.”

Sharzter wants to see his defense improve before the district tournament next week.

“Defense wins championships. We have to make the routine plays and support our pitchers,” he said.”

Freshman Landon McGinnis earned the win for the Titans, pitching four innings, giving up two runs on three hits, with one walk and six strikeouts.

The Bulldogs scored their only two runs of the game in the first inning of play.

The Mercer bats got back both runs in the bottom half of the first on a sacrifice fly by junior Jamason Sherrow and a wild pitch.

The Titans scored five more runs in the second. Senior Hunter Kelly hit a sacrifice fly, senior Andrew McGinnis singled to center and Sherrow singled to left. The other two runs were scored on a wild pitch and error.

Landon McGinnis cruised the rest of the way.

Sophomore Mason Smith led off the bottom of the third inning with a solo home run to left field, and Burgin found themselves down 8-2.

Mercer’s next six runs were scored in the fourth inning on four errors and an RBI each for junior Alex Caton and freshman Noah Cocanougher.

Burgin Head Coach Donnie Edwards was pleased with his young team’s effort, despite what was on the scoreboard.

“We came out and we were fired up and ready to play. We came out and swung it well,” he said. “Our defense had a few drops out in the field we should’ve made plays on, which would’ve changed the direction of the game. I thought our pitcher, John Boursaw, did a great job. Overall, that was one of his better performances of the year against a really good team.”

Edwards talked about his team’s progression throughout the season, heading into the district tournament.

“They’ve grown so much. They don’t realize it yet, but I see it. There’s a lot growth there,” said Edwards. “These guys are becoming more and more baseball savvy. As the year as went on, they’ve picked up on so much. It’s exciting to see where we can get to with all the youth we have.”

Reed, Stratton and senior Greg Korte had one hit each for the Bulldogs. Stratton had the only RBI for Burgin.

The Titans will host Anderson County at home on Friday, May 18, at 6 p.m., for their final regular season game before taking on East Jessamine in the first round of the district tournament on Monday, May 21.

The Bulldogs will be back on the field Thursday, May 17, when they host Cordia. They have two more games left against Wolfe County and East Jessamine before taking on West Jessamine in the first round of the district tournament on Monday night. 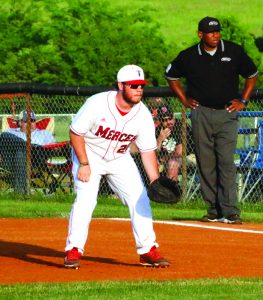 Junior Alex Caton prepares for a ground ball at first base against Burgin on Tuesday, May 15. Caton had one RBI coming off a hit-by-pitch in Mercer’s 14-2 victory over the Bulldogs. (Photo by Arpan Dixit) 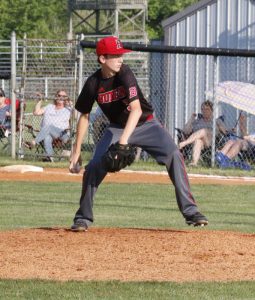 Burgin’s John Boursaw winds up to deliver a fastball against Mercer County on Tuesday, May 15, at Amos Black Field. The Bulldogs were defeated by the Titans, 14-2, in five innings. (Photo by Arpan Dixit)