After dropping three games in a row to Pulaski County, Shelby County and Rockastle County, the Mercer County Lady Titans (17-13) softball team have rebounded to win three in a row against South Laurel, North Laurel and Middlesboro.

Mercer competed in the Somerset/Pulaski County Showcase, playing  three games on Saturday, May 12.

It was a strong performance for both Mercer pitchers in the circle, only allowing two hits.

The Lady Titans got started early in this one, scoring three runs in the first inning.

Shephard got up to the plate in the third inning and did some more damage. She tripled on a fly ball to left field, scoring freshman Ry’ann Tharp, sophomore Taylor Sallee and Burgess to make the score 6-0 in favor of the Lady Titans.

The last two runs were scored by error. Sallee hit a line drive that was mishandled out in center field, scoring junior Emily Rawlings and sophomore Lyndsey Day.

Shephard had a very strong pitching performance in Mercer’s 3-1 win, throwing a no-hitter against the Lady Jaguars. She pitched all five innings, giving up one run on no hits, with one walk and two strikeouts.

North Laurel scored their only run on an error by Sallee in the first inning. Other than that Shephard was flawless on the mound and the Lady Jags had no answer.

Mercer’s three runs were all scored in the top of the second inning. Senior Loren Hahn doubled to center field, scoring Sallee. Sophomore Brinkley Prewitt sacrificed herself to score Shephard and senior Maddie Williams grounded out to third base, scoring Day.

Sallee and Hahn led Mercer with two hits each.

White earned her second win of the day, pitching all five innings, giving up one run on two hits, with one walk and two strikeouts against the Lady Cardinals, leading Mercer to a 5-1 victory.

Mercer scored the first five runs of game in the first three  innings.

Burgess singled on a line drive to left field, scoring White. Sallee doubled to left, scoring Tharp and Burgess. Sallee later scored on a passed ball to give Mercer a quick 4-0 lead after one inning.

Rogers sacrificed herself to the pitcher, scoring Shephard in the third inning to make it 5-0.

South Laurel scored their only run off a home run by Mackenzie Powenski in the fourth inning.

White led Mercer with two hits and Sallee had a game-high two RBI.

Mercer’s senior night was spoiled by the Lady Rockets by a final score of 12-7.

White took the loss, pitching six innings, giving up 12 runs on nine hits, with three walks and one strikeout.

Jaylon Ponder earned the win for Rockcastle, pitching two and two-third innings giving up two runs on two hits, with two walks and one strikeout.

Rockcastle scored the first four runs of the game, and eventually took a 7-4 lead before Mercer tied it up in the fifth inning. The Lady Rockets broke open the game in the top of the sixth inning, scoring five runs.

The Lady Titans answered back with two runs in the second inning. Rogers grounded out to third base, scoring Sallee and White singled to center field scoring Rogers to make it 4-2 Rockcastle.

Raegan Chasteen doubled to center field, scoring two more in the third inning. Mercer answered with two runs of their own in the third. Sallee doubled to left, scoring Freeman and Burgess.

Bailey Chasteen scored on an error by Burgess in the fourth to make it 7-4, but Mercer answered with a big fifth inning.

Freeman homered to left, and Sallee stole home to cut the lead to 7-6, and Shephard scored on an error by Jordyn Powell on the same play. Just like that, the game was tied at seven. Unfortunately for the Lady Titans, the sixth inning was a disaster.

Bailey Chasteen, Emma Smith, Powell and Madison Yates drove in a combined five runs in the inning to put the game out of reach.

The Lady Titans are back on the field Thursday, May 17, when they travel to take on Dunbar at 6 p.m. 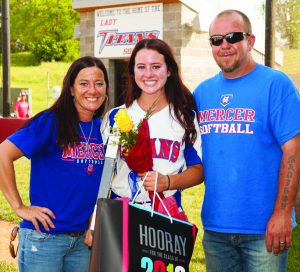 Senior Maddie Williams (middle) is pictured with her parents, Ashley and Thomas Reynolds during Mercer softball’s senior night ceremony on Friday, May 11, before taking on Rockcastle County. (Photo by Mark Edwards) 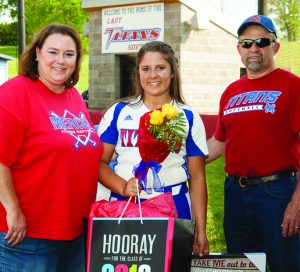 Senior Loren Hahn (middle) is pictured with her parents, Scarla and Dwayne Hahn, during Mercer softball’s senior night ceremony on Friday, May 11, before taking on Rockcastle County, (Photo by Mark Edwards)