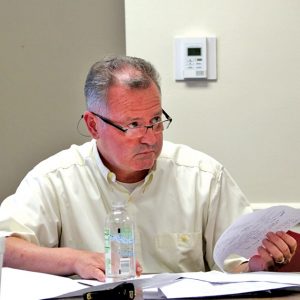 While issues remain to be settled between Boyle and Mercer Counties, Mercer Judge-Executive Milward Dedman said he’s happy with Boyle’s concessions. “We’re in a lot better position than what we were,” Dedman said.

Mercer County has scored a victory in their negotiations with Boyle County over how joint jail expenses are divided between the two counties. But at least one Mercer resident is wondering if the county should be asking for more.

Last week, the Boyle-Mercer Joint Jail Committee approved amending the interlocal agreement between the two counties that would allow Mercer County to pay a smaller share of jail costs in 2019.

Mercer Judge-Executive Milward Dedman said the amended agreement would reduce Mercer’s contribution towards jail expenses from $883,198 to $799,189 for the next fiscal year.

In addition, Mercer will pay Boyle a flat fee of $3,000 a month—amounting to $36,000 a year—for administrative costs. Mercer will also continue to pay off debt at Boyle County Detention Center. The final debt payment on BCDC is due in February 2019.

In April, Boyle officials agreed to use the Boyle County Sheriff’s Office for court transport despite objections from jail officials. However, the Boyle Fiscal Court chose to ignore that recommendation and to continue using BCDC personnel to transport inmates.

Under the new budget, Mercer will be reimbursed those expenses, Dedman said Tuesday.

The Mercer County Fiscal Court approved the new jail budget. However, Terry Dunne, a Mercer citizen who has attended both fiscal court and joint jail committee meetings, thinks the county should ask for even more.

Dunne, who has persistently questioned how BCDC is managed, thinks jail personnel and funds should be used to handle inmate transport costs for both counties. He also feels that county officials should press for a lower floor.

He said the ratio is established by inmate days served over a year.

When Dunne suggested Dean change the interlocal agreement further, he said he was limited to what had already been agreed upon by both counties.

Magistrate Tim Darland also said he wasn’t happy with the way the counties split expenses either, but voted to approve the new budget, saying, “It’s better than what we had.”

“I think we’re in a lot better position than what we were,” said Judge Dedman. “It’s pretty close to what we proposed.”

Dedman said Mercer would continue talks with Boyle over how transportation costs are split.

“I want to continue talks about putting all the transport costs on the jail,” he said.

Now the ball’s in Boyle’s court. The Boyle County Fiscal Court will consider the new agreement on May 24.