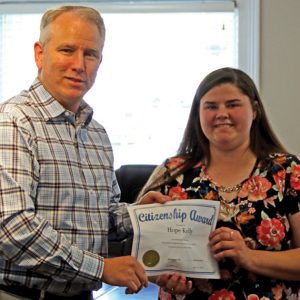 Harrodsburg City Commissioner Scott Moseley presents the April citizen of the month award to Hope Kelly, who stopped and rendered aid at a vehicular accident.

Hammons and Allen have been serving as interim chiefs since the retirement of Ric Maxfield and Billy Whitenack earlier this year. Both Hammons and Allen could have retired already, but they wanted the chance to make a difference at their departments.

Allen has been a police officer for 17 years and has served with the HPD for 13 years. Among his stated goals, he would like to create a new ranking structure that would reward officers who enjoy “chasing taillights” but who don’t want to be supervisors. Allen would also love to bring back hazardous duty retirement benefits, but that may prove difficult considering the state’s continuing pension crisis. 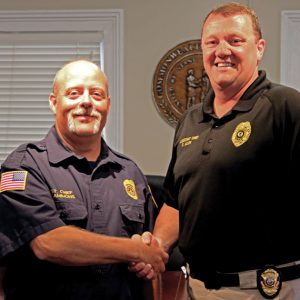