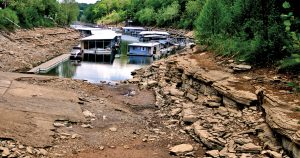 It may look a little dry, but Pandora Marina is the only local marina still able to launch boats. Other marinas have been forced to shut down their boat ramps until the water level at Herrington Lake returns to normal. The water level is being kept low to allow construction on the replacement for the Kennedy Mill Bridge.

The story at Herrington Lake isn’t the Kennedy Mill Bridge, which remains closed while construction continues on its replacement, but the lake.

In order to complete work on the replacement, the lake level is being kept at 720 feet, leaving all but one of the local marinas high and dry.

This phase of construction was scheduled to happen earlier in the year. The contractor, Walsh Construction Inc., asked Kentucky Utilities (KU) to hold the lake at 720-feet for at least 10 days to allow the contractor to begin pouring concrete. But the work was delayed because of all the rain over the last few months.

As a result, KU has been forced to drop the lake level right as the summer season shifts into gear, forcing many local marinas to shut down their boat ramps and boat owners to look for places upstream where they can launch their boats.

“It hasn’t been too awful bad,” said Tona Tudor, who, with her husband John, owns Sunset Marina, which is located over on the Garrard County side of the bridge.

While Sunset is open, Tudor said they ran out of boat ramp two weeks ago.

“You have everybody scrambling to find a place to put their boats in,” she said.

“Getting in and out of there is crazy,” she said.

Tudor said business has been good, considering the bridge is shut down and the lake is so low.

“We had a decent two weekends,” she said. But the Memorial Day weekend will determine whether it’s going to be as good a summer as last year, she said.

Once work is done, KU will allow the lake level to rise. But that depends on rain. After months of wishing the rain would finally end, many local marina owners find themselves wishing it would start again. Except on the weekends.

KU will not restore Herrington to the summer pool. In order to complete work on the bridge foundation, the lake will need to stay at or below 734-feet through the end of this year.

The low water level hasn’t been all bad. Tudor said many residents have taken the opportunity to clean their properties.

“It’s a crazy time but it is for the better,” said Tudor. The scheduled completion date for the bridge is November 2019, but many local residents have been pressuring state officials to speed up the construction project.

“I hope and pray that they’re ahead of schedule,” Tudor said.