Anyone interested in the history of Salvisa should check out a photographic exhibit which will be on display at Family Affair Restaurant starting at 2 p.m. on Monday, May 14.

The pictures were taken by Davis Gritton, a house painter and amateur shutterbug.

“He shot his camera all the time,” said historian Anna Armstrong.

Armstrong has spent her life recording the history of Mercer County, through oral histories and photographs taken by herself and others.

She was recording an oral history by Marshall Gritton when he mentioned his father, Davis, had taken pictures of Salvisa, Harrodsburg and the surrounding countryside.

“It was a terrific find,” Armstrong said. “It allows us to see what the area was like.”

Salvisa’s population in 2010 was 420, according to the federal census. But the small town has a long history. It’s been 200 years since Salvisa was established by Robert McAfee.

Armstrong wanted to honor that history and she said Family Affair, which has been owned since 1991 by Kent Sparrow, Judy Kays and Shirley Johnson, was the ideal site. 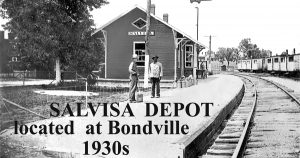 This photograph of the Salvisa Depot is one of the pictures which will be on display at Family Affair starting May 14.