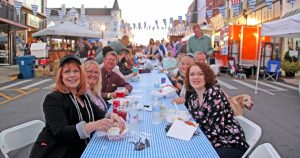 Events like Oktoberfest in downtown Harrodsburg led to a big year for local tourism in 2017. Officials hope to build on that momentum in 2018. Oktoberfest happens this year Oct. 12–14.

Last year was a big one for tourism in Mercer County, and local officials want to build on that momentum for 2018.

Mercer County recorded a 7.5 percent increase in tourism in 2017, according to the Kentucky Tourism, Arts and Heritage Cabinet. Last year’s increase continues a growing trend that has held for more than five years. Last year, tourist activity generated nearly $56.5 million in total tourist spending, according to state figures.

“This increase illustrates our efforts are making a difference,” Hackett said.

Tourism contributed more than $15 billion towards the state economy last year. All nine of the state’s tourism regions, including Bluegrass, Horses, Bourbon and Boone of which Harrodsburg/Mercer County is a part, registered gains in 2017, according to the 2017 Economic Impact of Kentucky Tourism report. The annual survey also showed tourism supported over 195,000 jobs in Kentucky in 2017 and generated more than $1.5 billion in tax revenue, with $202 million going directly to local communities.

That’s thanks to the efforts of the Tourist Commission as well as the enduring appeal of the local festivals and fairs and attractions such as Shaker Village of Pleasant Hill, Beaumont Inn, Bright Leaf Golf Resort, Old Fort Harrod State Park, Anderson-Dean Community Park and the marinas and campgrounds on Herrington Lake and the Kentucky River.

Local officials are looking to build on that momentum, but factors—including the weather—outside their control may work against them.

The state shut down Kennedy Mill Bridge earlier this year. And while the contractor is hard it work on building a replacement—county officials said the contractor worked through the rain last Saturday—the new bridge won’t be ready until next year at the earliest.

There has also been a big increase in the price of gas over last year. According to AAA, the average gas price has increased by as much as 45-cents over the last month. The price increase is driven by declines in the nation’s oil stocks, political instability in the Middle East, production cuts by the members of OPEC and a worldwide increase in energy consumption.

In Harrodsburg, one of the biggest drivers in tourism is Oktoberfest. Last year’s street festival brought 13,000 visitors downtown, despite weather-related issues and power outages.

The Harrodsburg City Commission seems to be moving toward concentrating their efforts towards what they called the “big four festivals:” Oktoberfest, Broadway Days, the Fort Harrod Beef Festival and Pioneer Days.

“Anything after that, you start to thin out,” said Commissioner Jack Coleman.

Last month, the city moved the monthly auto shows and motorcycle shows off Main Street to Chiles Street, in part because of complaints from local merchants.

The commissioners are also mulling over, but have not made a firm decision, to increase the city’s contribution towards Oktoberfest, with the provision that the festival, despite the huge boost to local merchants, needs to start earning money.

“The year after that, we may change our minds,” said Mayor Eddie Long.

For more information about Harrodsburg/Mercer County, known as “the coolest place in history” with a growing list of visitor experiences, call 800-355-9192 or visit www.HarrodsburgKy.com.

For more details about the economic impact study, visit www.kentuckytourism.com/industry/toolkit.