The 12th Region boys and girls tennis tournament was originally supposed to be played in Danville at Boyle County High School, Danville High School and Centre College this past weekend, but mother nature played her role, and the tournament was moved to Top Seed Tennis Club in Nicholasville.

The Mercer County boys tennis team entered the tournament with one of the youngest teams in the region, consisting of no seniors or juniors, three sophomores, one freshman and three eighth graders.

Moseley won his first round match in comeback fashion. He defeated Andrew Mayo of Madison Southern 1-6, 7-6 (7-2), 1-0 (10-5). After losing the first set by a big margin, Moseley made adjustments and was able to grind out the victory in a super tiebreaker. Unfortunately, Moseley’s run would end in the second round to Pulaski County’s Jackson Martin, 0-6, 1-6.

Sophomores Bryson Marcum and Jake Becknell were the top doubles seed for the Titans. Eighth graders Jonah Lewis and John Hayslett were the other doubles team for Mercer.

Lewis and Hayslett lost to Bertrum and Reynolds from Wayne County in straight sets in the first round, 3-6, 0-6.

Marcum and Becknell won their first round match against Stowe and Campbell from West Jessamine in straight sets, 6-4, 6-1. Their run ended in the second round to the Hechemy brothers of Madison Southern, the number two seed in the region, 2-6, 1-6.

To qualify for the state tournament, individual singles and doubles teams must make the semifinals.

While their season ended early, the future is very bright for Mercer boys tennis. 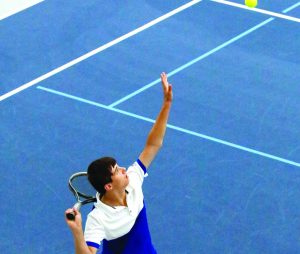 Freshman Ryan Allen gets set to serve during his first round singles match at the 12th region tennis tournament on Saturday, May 5, at Top Seed Tennis Club in Nicholasville. (Photo by Arpan Dixit)