The Mercer County Lady Titans found themselves in a defensive battle Tuesday night against Pulaski County.

The Lady Maroons looked to score early in the game, loading the bases with one out. Mercer’s starting pitcher Kayleigh White was able to get out of the inning unscathed however, thanks to the aid of her defense.

Ry’Ann Tharp booked the second out on a fly ball to shallow left field, and held runners in position with a laser throw to home plate.

Leia Freeman ended the inning when she gloved a hard hit grounder down the third base line for the 5-3 out.

Taylor Sallee opened the bottom of the first inning for Mercer with a line drive single to left field. Lady Maroon’s pitcher Krystin Wilson allowed only two more hits, no walks and no earned runs for the remainder of the game, while striking out 11 Mercer batters.

An error and base on balls in the top of the second inning put White in another jam, but again the Lady Titans were able to escape the inning unharmed.

With one out and runners on first and second, Sallee made a diving stop at shortstop and flicked the ball to second basemen Brinkley Prewitt for the out. Again Freeman made the final out of the inning with another 5-3 ground out.

Freeman saved her best defensive play for the end of the third inning. With a runner on first, she snatched a line drive and rifled the ball to first for the double play.

“Leia (Freeman) played outstanding in the field. That’s just her, she lives for those types of moments,” said Mercer Head Coach Robbie Tharp. “She’s a hard nosed sophomore, and that’s why she plays that hot corner. She’ll walk right up to the plate, she’s got that mean mentality to her.”

Kylie Devine opened the bottom of the third inning with a hard hit double down the third base line that squeezed under Lady Maroon’s Emilee Gowers glove. Devine took third base on a wild pitch by Wilson and scored the Lady Titans only run on an error by shortstop Gabbie Countryman who dropped a fly ball.

Pulaski County answered in the top of the fourth inning, tying the game at  one-all. With runners on the corner and one out, second basemen Krista Johnson drove in Makenzie Dick on a fielders choice to second base.

The score remained tied through the fifth inning, but the Lady Maroons took their first lead of the game in the top of the sixth inning.

With one out Countryman reached base on balls and two batters later was driven home by a Wilson double to left center field, giving Pulaski County the lead, 2-1.

“We talked to them after the game about how well they competed defensively and offensively,” said Tharp. “We were just facing one of the regions best pitchers. (White) has an enormous amount of spin, an enormous amount of command of every pitch that she throws. She doesn’t miss much, she doesn’t give up walks, she’s there to strike you out.”

Mercer falls to 14-10 on the season and 6-3 in the region with the loss. They have back to back home games against Shelby County  and Rockcastle County on Thursday and Friday, May 10 and 11. Both games are scheduled to start at 6 p.m. 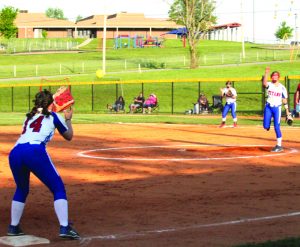 Junior Leia Freeman (14) catches the ball for the force out from pitcher Kayleigh White (right). The Lady Titans fell to Pulaski 2-1 on Tuesday night. (Photo by Jared Holt)