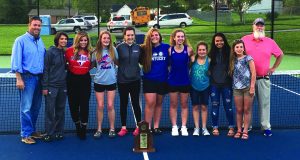 Winning the 12th region title as a team is really impressive for a young team. What’s even more impressive is how freshman Rebekah Trent was able to win her first singles title.

Trent was facing off against Boyle County senior Mia Kendrick, the number one seed in the region, who hadn’t lost a region match all year.

Trent had her back against the wall, losing the first set 3-6 and down in the second set 2-5, until she made a furious comeback. She won the next five games in the second set, breaking her opponent’s serve and holding her own, to win 7-5. The third set was decided with a super tiebreaker, first to 10 points. Trent found herself down 7-3 in the tiebreaker, but just like the second set, she came back and was able to tie the match. Both Trent and Kendrick had multiple match points, with some rallies lasting two or three minutes long. Kendrick hit a few balls out, which she rarely does, and Trent took home her first singles title, winning the tiebreaker 18-16, and winning the overall match 3-6, 7-5, 1-0 (18-16).

The Lady Titans have had recent success in region play. Former Mercer tennis star Kyleigh Murray was the first ever Lady Titan to win the singles title in 2015 and won it again in 2016. This is Mercer’s first overall region title since 2012. Since then, they have won region runner-up three times, in 2013, 2015 and 2016.

“For my first year, it’s been the most enjoyable ride that I’ve had,” said Lyons. “I’ve coached a lot of different sports, and had a lot of luck in a lot of them, but this one was special because of how it ended.”

Junior Gracie Caton won her first round singles match against Macy Weaver from Wayne County 6-0, 6-0. Caton was defeated in the second round 2-6, 6-2, 1-0 (10-8) by Emma Calfee from Pulaski County.

Sophomore Kiersten Bryant and freshman Ania Boutin, the number five seed in the region tournament and highest doubles seed for Mercer, made it to the semifinals. They won their first match against Taylor and Hicks from Wayne County 5-7, 6-0, 1-0 (10-6). They defeated Grubbs and Crawford from Danville 6-3, 3-6, 1-0 (11-9) in the quarterfinals. Their run ended in the semifinals, losing to Kibler and Graves from East Jessamine, 2-6, 2-6. Kibler and Graves were the number one overall seed.

Senior Avery Thompson and sophomore Raegan Long were the other doubles team for Mercer. They defeated Bean and Cerqueira from Boyle County in the first round 7-5, 1-6, 1-0 (10-8). They beat the Gettler sisters from Garrard County in the second round 6-1, 7-6 (7-5). Their run ended in the quarterfinals to Clouse and Neely from Somerset by a final score of 6-7 (5-7), 0-6.

“At the beginning of the year, I didn’t know this was possible. I had a feeling we would progress a substantial amount, but not to this point,” said Lyons. “I couldn’t be more proud of each one of these girls because it took a total team effort to get the overall trophy. I’m a truly blessed man.”

Trent and the doubles team of Boutin and Bryant will participate in the KHSAA Tennis State Championships, Thursday through Saturday, May 17-19. The state tournament will be held at the Hilary J. Boone/Downing Tennis Complex on the campus of the University of Kentucky, and also at Shillito Park. 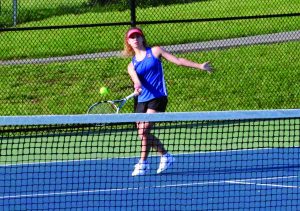 Rebekah Trent hits a volley for a winner during her singles match against Mia Kendrick of Boyle County for the 12th region singles title. (Photo by Arpan Dixit) 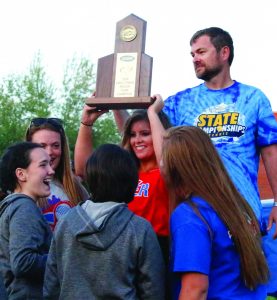