The Mercer County Titans  (11-7) have done a solid job this season coming off a loss. They are 4-1 following a loss, but unfortunately, a late flurry by the Franklin County Flyers (12-7) stopped that trend. The Flyers won by a final score of 5-3 on Tuesday, May 8.

Freshman Landon McGinnis took the loss for the Titans, pitching two innings, giving up three runs on one hit, with three walks and one strikeout.

Dario Gutierrez earned the win for the Flyers, pitching two and two-third innings, giving up one run on two hits, with two walks and five strikeouts.

“I mean, we struck out 10 times through six innings. They did a really good job throwing strikes, mixing it up and keeping us off balance,” said Head Coach Adam Shartzer. “We were hitting the baseball,  but they were going right at them. We just couldn’t get our game rolling.”

Franklin County got on the board first in the top of the second on a Gutierrez sacrifice fly. T.A. Crumbaugh doubled in the third to give the Flyers a 2-0 lead.

The Titans tied the game up in the bottom half of the fourth inning. Sophomore Dillon Warren grounded out to the shortstop, but junior Jamason Sherrow was able to score on the play to cut the Franklin County lead to 2-1. Junior Tanner Murphy drove in the tying run on a single down the third base line, scoring senior Andrew McGinnis.

Barnett cruised in the fifth inning and McGinnis and Dillon Warren were able to turn a 4-5-3 double play to end the inning.

Franklin County did their damage in the top of the seventh. Cole Hampton bunted and reached on an error by senior Noah Irvin at first base, scoring the go-ahead run. Aram Kumar hit a ground ball and reached on an error by Warren at short to give the Flyers a 4-2 lead. Crumbaugh grounded out to short, but another run scored to give Franklin County some insurance heading into the final inning.

The Titans made it interesting on a sacrifice by McGinnis to make it 5-3, but the Flyers were able to hold on.

Shartzer talked about his team lacking energy after the loss.

“We don’t want to fake energy. We don’t want to just cheer to cheer,” he said. “We want to have a purpose. Everybody on this team has a job whether you’re in the starting lineup or on the bench, you’re still part of this team. We have to play for the name on the front of the jersey.”

The Titans will be back on the field Friday, May 11, when they host Nelson County at 6 p.m. 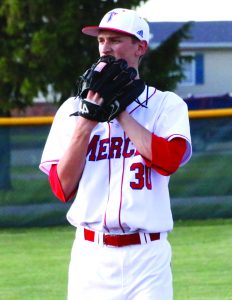 Junior Josh Barnett thinks about which pitch to throw next. Barnett got a no decision in Mercer’s 5-3 loss to Franklin County on Tuesday, May 8. (Photo by Arpan Dixit)