After winning their first four games of the season, the Burgin Bulldogs (4-5) baseball team dropped their sixth straight game at the hands of the Frankfort Christian Royals  (0-3), by a final score of 8-1 on Saturday, April 28.

It was a special day at Burgin. Mark Darland, a former coach in the Burgin and Mercer County area who was diagnosed with ALS in 2017, was honored before the game in an emotional ceremony.

The Bulldogs defeated the Royals earlier this season, 7-6.

“I thought their pitcher did a great job of getting ahead in the count. We have to do a better job of going the other way at the plate. When a pitcher is doing a great job of throwing like he did, you have to adjust and hit the ball where it’s pitched,” said Head Coach Donnie Edwards. “Our pitchers just fell behind in the count way too much. We had a lot of walks to be able to overcome any deficit.”

Burgin scored their only run of the game on a Reed single in the bottom half of the third inning, scoring junior Matthew Kirkpatrick.

Frankfort Christian’s Ben Foster had a game-high two RBIs and Hudson Uebel, Matthew Tingle and Ty Hancock had one RBI each. The other two runs were scored on errors by Burgin.

The Bulldogs had five errors on the day, compared to only one by the Royals.

Edwards has said before that building this team will be a process.

“Our guys are young and there are in-game adjustments that have to be made. We will get better at that with more work and experience,” he said. “The great thing about this game is tomorrow is a new day to get better.”

The loss drops Burgin to 4-6 on the season. The win for Frankfort Christian is their first of the season.

The Bulldogs will be back on the diamond today, Thursday, May 3, when they host Paris at 5:45 p.m. 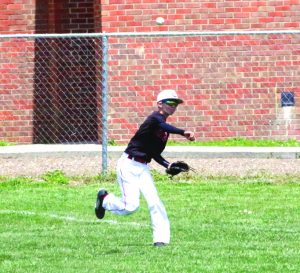