Down two runs with three outs to go would seem like a loss for a lot of teams in the top of the seventh inning, but not for the Mercer County Lady Titans (8-9). The Lady Titans used a four-run seventh inning to defeat the West Jessamine Colts (7-9) by a final score of 6-4 on Thursday, April 26.

Mercer sweeps West Jessamine for the second year in a row, and the fourth time out of the last five seasons.

Seventh grader Kayleigh White earned the win for Mercer, pitching four innings, giving up one run on one hit, with two walks and six strikeouts.

White came in to relieve freshman Stevie Shephard, who started the game, and pitched three innings, giving up three runs on three hits, with five walks and one strikeout.

Addison White took the loss for the Colts, pitching all seven innings, giving up six runs on 11 hits, with no walks and three strikeouts.

“We’re just really resilient. I mean, we were flat at the start of the game. We kept telling our players that West wants it just as bad as we do,” said Head Coach Rob Tharp. “I think we were assuming too much after the way we played them at home.”

The Lady Titans defeated the Colts 18-2 in their last meeting in early April, but Brooke Childers was in the circle  for West. The Lady Titans were able to tee off on Childers, especially freshman Brooklin Burgess, who had five RBIs and a home run. Addison White is West’s strongest pitcher, and the Lady Titans, despite not being able to get anything going early, were able to get it going late and come out with the win.

“I will give credit to West, because they were into it the whole entire game. They were energetic in the dugout and were loud the whole game,” said Tharp. “We had to really dig deep. We just had to dig in and keep fighting and I thought we did that really well in the final inning.”

Mercer scored the first run of the game in the top of the second on a Burgess single, driving in sophomore Leia Freeman. That lead didn’t last very long.

The Colts tied the game at one on a bases loaded walk given up by Shephard in the third inning, took the lead on an infield single by Heather Laird and added insurance after Olivia Bryant was hit-by-pitch with the bases loaded. Shephard was able to get out of the jam after striking out Brandi Hill for the final out.

The Mercer bats struggled in the third, fourth, and fifth innings, while West was able to extend their lead to 4-1 on another bases loaded walk, this time by White.

Senior Maddie Williams was hoping to start a rally in the fifth inning, but was robbed of a home run. She smoked a ball to left field, but it caught a power line and dropped back into play. Instead of rewarding her with her first home run of the season, the umpire ruled it was a double, Williams was left stranded on second base to end the inning.

Tharp was disappointed on the missed home run call.

“I was disappointed because I feel like that was a really good hit, and she hit it really hard,” said Tharp. “But you know, it was a judgement call and I’m fine with that.”

The sixth inning was where the rally started. Burgess drove in another RBI, her team leading second run driven in for the game, doubling to center field, scoring freshman Kylie Devine.  Devine pinch-ran for senior Loren Hahn after she led the inning off with a line drive single into center field.

White cruised in the bottom of the sixth, with a 1-2-3 inning and the Lady Titans had one more shot to tie or take the lead in the top of the seventh.

Up to the plate came freshman Ryann Tharp. After fouling off three pitches, Tharp homered over the left field wall to cut the West lead to 4-3.

“She’s (Tharp) had a good season. She’s swinging the bat relatively well. She struggled at the beginning of this game and flew out to the second baseman twice, but she made a good adjustment in the last at-bat and was able to hit it over the fence,” said Tharp, talking about his daughter. “I told her when she went up to bat she was going to bunt the whole way, but she got to a two-strike at-bat and was able to hit one out.”

The rally was on. Sophomore Taylor Sallee doubled on a fly ball to center field, scoring Williams on the play and just like that, the game was tied at four.

Hahn’s sacrifice fly to center field, scoring White, gave Mercer a 5-4 lead. The next batter, Freeman, reached on an error by Hill for West. It was a big error and the biggest defensive play of the game, because White was able to score on the play thanks to some heads up base-running.

White came out in the seventh inning, gave up a lead-off single, but struck out the last two batters of the game to earn the win.

Mercer will be back on the field today, Thursday, May 3, when they travel to take on the Western Hills Lady Wolverines at 6:30 p.m. 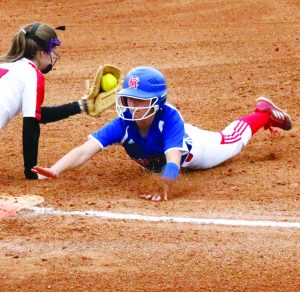 Freshman Stevie Shephard (right) dives back to first base after an attempted pick-off play. Shephard was called safe on the play and the Lady Titans won the game 6-4 on Thursday, April 26. (Photo by Arpan Dixit)