The Lady Titans have had the hot bats lately, but they struggled Tuesday night to get the hits when they mattered most against district rival East Jessamine.

The game stayed tied, 1-1, through six innings but a two run homer by Hannah James put the Lady Jaguars up by 2 and sealed Mercer’s fate.

“We are a little disappointed,” said Lady Titans Head Softball Coach Rob Tharp said. “Kayleigh looked good on the mound and our defense was good, we just couldn’t get the hits when we needed them most.”

The Lady Titans started off strong with Kayleigh White on the mound. She was able to strike out two batters and freshman catcher Brooklyn Burgess fired it into second to  catch East’s Brylee Hage trying to steal.

Mercer wasted no time getting on the scoreboard. Leia Freeman tripled on a line drive to left field and brought in White. Unfortunately, that was the only time the Lady Titans would cross home plate.

White, though a 7th-grader, showed her normal poise on the mound and went three up, three down strikeouts in the top of the second inning.

East’s pitcher, Karlee Terral, was just as successful with one strikeout and a little help from her catcher, who caught off a foul by Mercer’s Abby Rogers at the net. East’s Hage ended the inning catching Stevie Shepherd’s fly ball at center field.

Mercer’s defense held the Lady Jaguars scoreless after the top of the third, but weren’t able to convert hits to runs and left two on base.

The Lady Jaguars got their first run in the fourth, with two outs after Tharp stretched it out to make the unexpected catch and almost caught the base runner tagging back up at second. Hannah James doubled to left field and then was drove in by Mallory McDowell on a fly to right field.

Mercer was making contact, but couldn’t find the holes with two pop outs to the infield and a caught ball in left field the end the fourth inning.

Once again, defense was key for the Lady Titans sending East back to the dug out, three up, three down at the top of the fifth.

East then showed off their defense easily making the outs off a couple of ground balls and a strike.

The sixth inning is when it all turned south for the Lady Titans. James put one over the center field fence, advancing one other runner and taking the lead for the Lady Jaguars 3-1.

Mercer still struggled at the plate and wasn’t able to get a runner on base.

Mercer kept East Jessamine from scoring in the sixth, but weren’t able to regain the lead after leaving the tying runner on base to end the game.

“Our defense did well and made the routine plays,” said Tharp. “We put forth the effort but we just couldn’t get it done at the plate. A hit at the right time in the seventh and we could have scored the tying run. We are going to keep working and stay positive and hope we see East again in the district tournament.”

The pitching was strong on both sides. East Jessamine pitchers, Terral and James, struck out six, while Mercer’s White sat down nine. 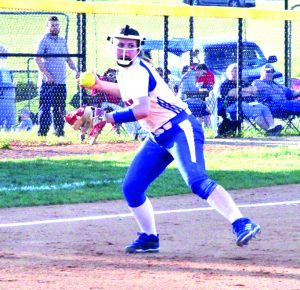 Leia Freeman looks to make the throw to first in the Lady Titans loss Tuesday night against East Jessamine. (Photo by April Ellis)