The Burgin Lady Bulldogs (1-7) softball team picked up their second win of the season this Saturday, April 28, in a 13-3 win over Menifee County (1-15) in five innings of play.

It was a big day at the Burgin softball complex, as they hosted the Bulldog Triangle which included Menifee County and Bell County.

The Lady Bulldogs dropped their second game of the day to Bell County (4-9) by a final score of 24-11.

Burgin collected six hits in a high-scoring game against the Lady Bobcats. Eighth grader Brittany Yates  started the game, and sophomore Brianna Sewell came in for relief. They both pitched a combined five innings, giving up 11 runs on six hits, with 19 walks and five strikeouts.

The game was tied at seven heading into the fourth inning where Bell County scored three runs to get some breathing room, and scored 14 runs in the fifth to pull away.

Junior Milli Hammons led the Lady Bulldogs with four RBIs. Yates and freshman Kenady Barnes were tied for second on the team with two RBIs.

Barnes, Sewell, M. Hammons and Yates, along with eighth graders Kaylee McCray and Grace Cocanaugher all had one hit each.

Bell County’s Mackenzie Shackleford led the Lady Bobcats with five RBIs and three hits to lead her team to a victory.  Makaya Baker was second with three RBIs.

Senior Grace Osbourn led the Lady Bulldogs to their second win of the season, pitching all five innings, giving up three runs on eight hits, with one walk and nine strikeouts. Osbourn also led the team in hits with four.

“I was very proud of the way we played this weekend. The girls are finally seeing what it takes to be competitive and they are starting to make the routine plays,” said Head Coach Taylor Bottoms. “It was great to see the girls active at the plate and on the bases. Every game is a learning opportunity and we are starting to capitalize on the small things to reach our goals.”

Since their weekend series, the Lady Bulldogs dropped a double-header to Frankfort on Monday, April 30. Burgin lost the first game 17-1, and dropped the second game in a close 3-2 affair. 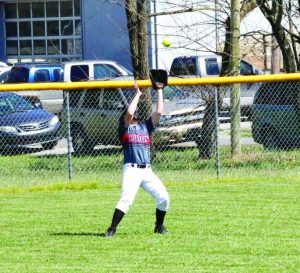