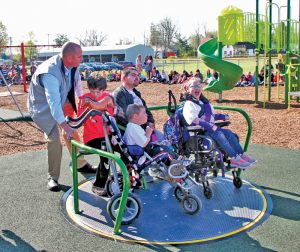 Burgin Independent School, with the help of Kendyl and Friends Foundation, had their ribbon cutting ceremony Monday morning for the completion of the first phase of renovations to the playground.

The 18-year-old playground was in need of some tender loving care along with some necessary updates so that all of Burgin’s students, regardless of ability, could enjoy playing outside.

Crimson Claycomb, whose daughter is the foundation’s namesake, approached Burgin school about renovating the playground.

Once they received the green light, the students and community jumped on board with fund raising efforts in early October.

The Burgin City Council also donated $10,000 to the project.

“With the raised cost of an all inclusive playground, we may have to work harder to get to our goal, but we will keep working until we get there,” said Claycomb.

Now the playground has a jungle gym, along with a wheelchair accessible swing and merry-go-round and inclusive swing.

A pour-in-place playground surface is now installed around the wheel chair swing and merry-go-round and the second phase of the playground is to install it on the entire playground. The new surface will allow wheel chairs to move easily.

The foundation is still trying to raise approximately $90,000 needed to finish the second phase.