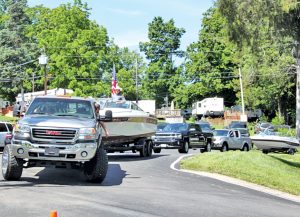 Local businesses rely on the steady stream of boaters on Herrington Lake during the summer. To keep that money pouring into Mercer County, support the cleanup efforts of the Herrington Lake Conservation League.

The Herrington Lake Conservation League is holding a fish fry on Sunday, May 20, starting at noon.

The fish fry will be held at Sunset Grill and Marina, on the Garrard County side of the bridge.

The event is for the benefit of everyone who lives along the lake or relies on it for drinking water, which includes almost everyone in Mercer County.

Last year, the work crew hired by the Conservation League removed 24 950-square-foot dumpsters of garbage from the lake.

Most of the League’s money is spent on their cleanup efforts paid for in part by fundraisers like the fish fry, but mostly through donations, said League President Angela Zevely at their public meeting.

The price is $10 for adults and $5 for children 12 and under. In addition to fish, the menu includes hush puppies, coleslaw, baked beans and a drink.

To find out more, contact Conservation League President Angela Zevely online at HLCLpresident@gmail.com or call her at 859-533-1348.